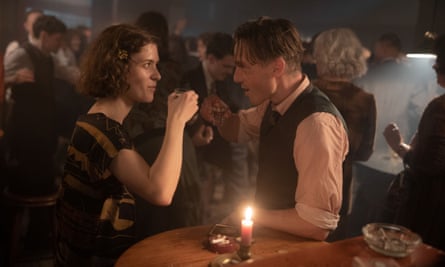 Babylon Berlin is the most expensive German television drama ever made. It’s also the most successful, with its depiction of Weimar Republic-era Berlin having been shown in more than 100 countries worldwide. Since its early seasons this detective noir show has exploded with colour, razzle-dazzle, danger and sweeping set pieces, and it has now spent five years vividly bringing to life a decade-long flash of chaotic democracy that ended in economic turmoil, corruption and, ultimately, fascism. With its superb opening titles, breathless, trippy pace and extravagant song-and-dance numbers – last season even saw a turn from Bryan Ferry, singing a German jazz version of his song Bitter-Sweet – heady, dangerous times have never been better depicted.

This season, the feel of the show has become even more menacing. Since its October launch on Sky Atlantic, UK viewers have been given a darker, wintry vision of Berlin, its smoky streets lined with the dishevelled and desperate victims of the 1929 crash. The Nazis are no longer lurking menacingly in the wings, but are violently taking centre stage. Lead detective Gereon Rath, played by Volker Bruch, has found himself uncomfortably close to Hitler’s militant supporters as he undertakes a secret assignment to infiltrate the National Socialist party. As the city descends into chaos, all the dancing and hedonism takes on a new poignancy, as it becomes clear that decadence is now a last, desperate refuge from the dreadful world outside the ballrooms. At one point, we see one of the show’s lead characters – flapper girl and sex worker-turned-aspiring-detective Charlotte “Lotte” Ritter, played by Liv Lisa Fries – nearly lose her job when she tries to help her homeless sister. The city depicted is one of broken dreams, shattered hopes and lives on the edge.

“I think: ‘Why do I do this when I could be doing a comedy or something?’,’’ says Fries as she wanders the streets of Berlin’s Neukölln district, talking into her cameraphone. “[And it’s] because things like that are still happening. It’s so insane and terribly sad that it’s real.” Fries’s character is a working-class Berliner, a striver, a fighter – and embodies the average citizen of the time in a way that makes her almost the true heart of the story. “When you realise how many people were there working creatively … and the role of women started to really develop. So it’s the beginning of something. But then it’s stopped so aggressively.”

The show is based on the Gereon Rath Mysteries, a series of detective noir novels by Volker Kutscher. A sixth English-language book is on the way. This latest series of the TV show draws on Goldstein, the third of the nine books, but its writers chose to make some changes when it came to the characters’ privilege.

“It would be strange not to have one of our main characters have a working-class background,” says Henk Handloegten, one of the show’s three main writer-directors. “[So we made Lotte] a social climber. She represents a very specific type of young woman in 1920s Berlin – whenever they are punched down, they come up fast, funny, and with a certain wit.”

For 10 episodes, the writers have plunged us into a world of moral ambiguity. Viewers can never be quite sure who is good, who is bad, who is on the right side of history. In the opening episode of the new season, we saw Gereon pulling on his swastika armband and heading out into the streets of Berlin as a brownshirt, bumping into a shocked Lotte during a brawl. How did it feel, I wonder, for Fries to see her co-star in those clothes? “Super strange. It felt dividing, I felt a big distance. In the shoot, he was part of a crowd, I didn’t see him personally, so he seemed like a part of the movement, and it didn’t feel good.”

Gereon is a man ebbing and flowing with the tide of history, whereas Lotte is continually fighting to not be pulled under – but it seems almost inevitable that eventually she, and most of the other characters, will be. It is hard to ignore the underlying fact that no matter how any of the characters develop, no matter where the plot takes them, they are ultimately doomed to fall victim to what’s coming.

“Most of them won’t survive the next 20 years”, says Tom Twyker, another of the main creative trio. “There’s a sad beauty to the innocence of everyone involved. However we judge anybody we meet, no one can be remotely aware of what’s ahead for them and how massive it is – the size and destruction and insanity that’s just lurking over there.”

Playing with the known element of history and then delving deeper into the fallible, human worlds of the characters – even the most deplorable ones – is one of the series’s strongest suits. It doesn’t just depict a linear march into the darkness that we the audience know is coming, but takes care to address the “what-ifs”, the wrong turns, and the delicate balance of light and dark at play in such a tumultuous period.

But what does that mean for the series finale? “It’s probably going pretty dark,” says Fries, acutely aware of the likely grim fate of her character. “Don’t expect something bright. Maybe it’s going to end tragically. I trust the writers. They invented something so complex, and it refers so much to my picture of how I see the world now, how I see people, how I want things to be. I’m very glad to be a part of that.”

The final two episodes of Babylon Berlin’s fourth season air in the UK on Sky Atlantic on Friday 18 November from 11pm, with episodes available on Now TV soon after