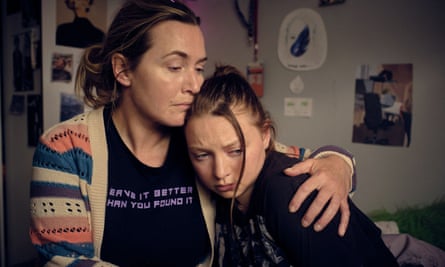 “If you see me sober, I ain’t awake,” George Jones slurs at an adoring Grand Ole Opry crowd at the Ryman Auditorium in Nashville. The audience laughs and cheers him on. Moments earlier, Jones’s team has been forced to slice through the hinges of a toilet door to pick up the incoherent singer, taping his knees straight so that he couldn’t fall down before marching him to that stage. But, once he’s there, he slots right into his king of country role, powder blue suit sparkin’ under the spotlights.

This is the opening scene of George & Tammy (available now via Paramount+ in the UK and Showtime in the US), the latest show to mine country music for its low-down dirty dogs, fabulous costumes and high drama. This one is a starry miniseries/biopic that tells the story of Jones, also known as Possum (for his marsupial features, though I can never hear that word in a voice that doesn’t belong to Dame Edna Everage) and his eight-year marriage to one Tammy Wynette, the most tragic of all the female country stars. Michael Shannon plays Jones as a man tortured by drink and self-doubt, while Jessica Chastain – who, after The Eyes of Tammy Faye, must have it in her contract that she plays a person named Tammy at least once a year – tackles the last three decades of Wynette’s complicated life. It’s a bit Star Is Born, a bit Walk the Line, and while it isn’t quite a No 1 hit, it deserves to be in the top 10 for at least a little while.

Country music usually lends itself well to television that knows how to handle its over-the-top spirit. George & Tammy doesn’t quite let rip in that respect, though the outfits and arguments are suitably bedazzling. Wisely, given the calibre of its actors, it focuses on the love story between the two main characters. It’s a better drama for it, but it does lack a touch of fun. For that, look to Nashville in its early seasons, which saw Connie Britton and Hayden Panettiere play country queens from different generations forced together for the sake of their careers. It was a soapy hoot, though in the end it outstayed its welcome, particularly when Britton’s titanic diva Rayna James was written out.

I can’t help wondering why more TV shows aren’t set in this world. The podcast Cocaine & Rhinestones (the clue to its appeal is in its title), which began in 2017, gives a potted history of some of the genre’s wildest moments and biggest stars, from Bobbie Gentry’s rejection of fame, to the scandal around The Pill by Loretta Lynn (RIP), with plenty of episodes given over to Jones and Wynette, and what they got up to together, and apart. Producer and presenter Tyler Mahan Coe has just announced a book deal for his version of the George and Tammy story, due in 2024.

Maybe the answer to why there aren’t more country shows comes from what happens when TV gets it wrong. I had hoped that this year’s amazingly trashy-looking Monarch – sadly, yet to come to the UK – might replicate Nashville’s charms. It promised to do a Succession on a country music family dynasty, and it has a frankly wild cast, including Susan Sarandon, Anna Friel and Beth Ditto, but critics in the US have not been kind. Entertainment Weekly called it “an often ridiculous mess”, and if a show about the excesses of country is seen as too ridiculous, then you know something has gone awry. Perhaps making it seem easy is harder than it looks. Or as the great Dolly Parton likes to say: “It costs a lot of money to look this cheap.”

Picks of the week

My Dead Body
Monday, 10pm, Channel 4
“She just wanted to leave something behind.” These are the simple, heartbreaking words of Toni Crews’s mum Jo as she discusses her daughter’s decision to allow her body to be publicly dissected after her death from cancer in 2020. Thanks to AI voice technology and extracts from her social media posts, Toni’s personality is also shown throughout the film – it’s clear that her desire to advance the cause of medicine has driven her to this decision and the team responsible for the dissection are anxious to honour her memory.
Phil Harrison

I Am Ruth
Thursday, 9pm, Channel 4
For anyone who’s ever been a teenage girl, this feature-length drama is agonising to watch, so brutally does it capture how horrible everything can feel. Kate Winslet, who co-wrote the episode with Dominic Savage, gives a flooring performance as single mum Ruth (above) who is sick with worry over her reclusive, social media-obsessed 17-year-old daughter Freya (played by Winslet’s real-life child Mia Threapleton). While it’s no news that the digital age is a terrifying world to grow up in, this story shows how its toxicity seeps into young people’s lives. Sure, the nepotism hasn’t gone unnoticed – but Threapleton’s talents are undeniably impressive. Hollie Richardson

A Spy Among Friends
ITVX, from Thursday
This drama about the doomed friendship between spies Nicholas Elliott (Damian Lewis) and Kim Philby (Guy Pearce) is an immersive treat. It’s told via the regretful Elliott’s debriefing by MI5 agent Lily Thomas (Anna Maxwell Martin) after Philby’s treason has been revealed. These jolly good public school chaps are already steeped in British reserve and the art of never quite saying what you mean, which proves to be the perfect preparation for the life of a spy. It was this distance and ambiguity that enabled Philby to infiltrate and almost destroy their world. A very English betrayal, stylishly rendered. PH

The Confessions of Frannie Langton
ITVX, from Thursday
Frannie Langton (Karla-Simone Spence) wakes up in prison after being accused of double murder. She recalls the events that led her here, from starting life as a slave on a 19th-century Jamaican plantation to being brought over to England and “gifted” to the wealthy Benhams – the victims. Her affair with troubled Madame Marguerite Benham (Sophie Cookson) was doomed from the start, especially with a laudanum addiction in the mix … This adaptation of Sara Collins’s award-winning novel beautifully brings the gothic love story to life. HR

Little America
Apple TV+, from Friday
“Where are you really from?” Variations of this loaded question are familiar to immigrants all over the world. The second run of this anthology series continues to tell the stories of people who have arrived in the US – and they are a varied and complex bunch of characters. Inspired by eight real-life tales, the show covers everything from baseball to catering, with backstories ranging from the cheerful to the tragic. It’s glossy and earnest but, given the way this subject is often treated, that’s not necessarily the worst thing. PH

Five of the best … TV mockumentaries

New series Live at the Moth Club (Dave, Thursdays) gives the mockumentary treatment to Britain’s underground comedy scene. But which mock-docs did it best?

With Litvinenko starring David Tennant on the way, next week we’ll be counting down five of the best shows based on recent events. Send us your picks at [email protected] (you can also send us any feedback or things you’d like to read about in What’s On, too).