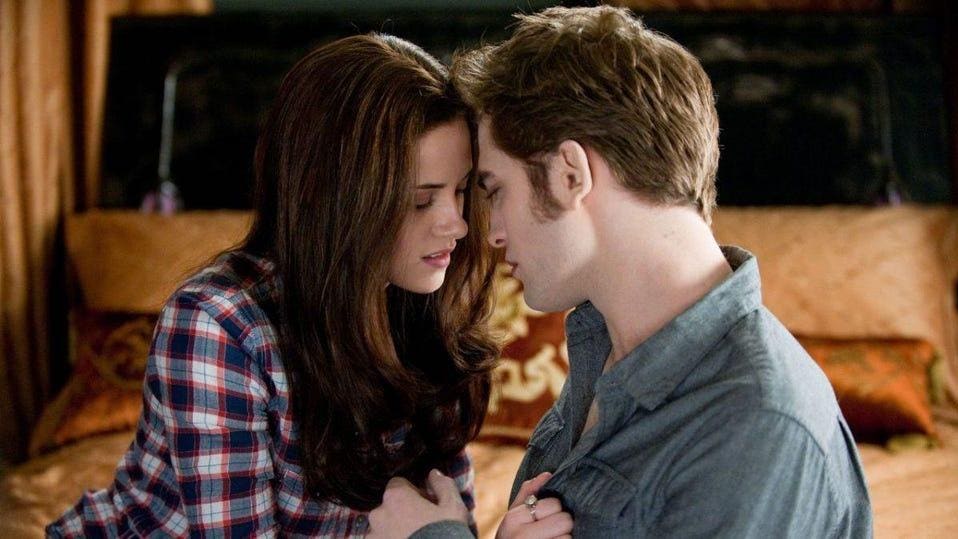 The $3.3 billion-grossing Twilight Saga did more than any other modern franchise to debunk the notion that films for and about girls and women were box office poison.

As has been the case since late last week, the top ten movies over at Netflix are compromised of the the Fear Street trilogy, Gunpowder Milkshake, the direct-to-VOD/streaming Bruce Willis sci-fi actioner Cosmic Sin and The Twilight Saga. However, at least for today, all five of the top movies on Netflix’s “daily most-watched” list are all five installments in The Twilight Saga. Alas, they aren’t in exact order, as it goes Catherine Hardwicke’s Twilight (the first and still the best), Chris Weitz’s New Moon (the worst), Bill Condon’s Breaking Dawn part II (the best sequel with a terrific final reel), David Slade’s Eclipse (the threequel and the only chapter to crack $300 million domestic) and Condon’s Breaking Dawn part I (the one where Bella and Edward get married and have bed-breaking sex before birthing a human/vampire baby).

The Summit (and eventually Lionsgate once they bought Summit) Twilight franchise was incredibly popular a generation ago, earning top-tier box office grosses on low-to-mid-tier blockbuster budgets, often sans 3-D, IMAX or related upcharge gimmicks. The first Twilight, which opened with a massive $69 million in November of 2008 (thanks to Harry Potter and the Half-Blood Prince fleeing to July of 2009), helped paved the way alongside The Dark Knight that same summer for the normalization of deep-dive “What does this all mean for culture?!” media coverage of big-scale movie blockbusters. Twilight, and especially The Twilight Saga: New Moon (which set a single-day record with a $72 million Friday and nabbed a $142 million domestic debut in November of 2009), did more to normalize the notion of films for/by/about women and girls not being box office poison.

While we were endlessly debating whether women and girls could drive films about/for and ideally from women and girls to comparable box office heights, Eclipse earned more in summer 2010 than Iron Man 2 ($623 million). Breaking Dawn I earned about as much in 2011 as X-Men: First Class ($355 million) and Captain America ($371 million) combined. If New Moon’s $142 million debut in 2009 had not been attended by a single male moviegoer, it still would have nabbed a bigger Fri-Sun debut than that year’s Transformers: Revenge of the Fallen. Oh, and New Moon’s global gross in 2009 almost doubled that of Star Trek ($385 million) and Wolverine ($373 million). Breaking Dawn part II topped $800 million five years before any non-Tony Stark MCU movie did so (Guardians of the Galaxy Vol. 2 in summer 2017).

The five movies earned from November 2008 to November 2012 $3.317 billion worldwide on a combined budget of $419 million, seemingly with little-to-no help from Chin. That gave it an average 7.9x rate-of-return. That’s one of the biggest that’s a budget-to-gross ratios for any big-budget (sorry Home Alone), live-action (sorry Despicable Me), non-horror (sorry Paranormal Activity, Saw, Jaws and Conjuring) blockbuster-y franchise in modern times. We can debate to what extent Twilight even plays in the horror sandbox (David Slade’s Eclipse certainly makes a token effort), but in terms of modern “big deal” blockbuster franchises, only Jurassic Park/Jurassic World (also kinda/sorta a horror series) stands taller with $5.009 billion on a combined $616 million budget. And they did it mostly (but not entirely, depending on the marketplace) without IMAX, 3-D and related PLF upcharges.

Stewart and Pattinson both “recovered” from the “Eww, those movies are for girls” cultural backlash and became prestigious and engrossing adult actors. Stewart remains an indie favorite who will eventually win an Oscar. Pattinson is playing Batman and has crafted an onscreen persona closer to Chris Walken and Crispin Glover than Chris Hemsworth or Chris Pine. I wish Catherine Hardwicke got more mileage out of launching the franchise. Twilight, with an indie sensibility and a self-knowing wit, is easily the best of the bunch. Alas, Hollywood has a habit of tossing female directors from the franchises (like Fifty Shades of Grey and Mamma Mia) they help create. While they didn’t earn as much as the eight Harry Potter films ($7.729 billion on a combined $1.155 billion budget) but did out-earn the four Hunger Games movies ($2.96 billion/$495 million).

Harry Potter was seen as the heir apparent to Star Wars until Disney went and bought Lucasfilm and the MCU kicked into its Avengers-driven gold rush. The Hunger Games’ Katniss Everdeen was implicitly sold as a “feminist, empowered” action movie counterpoint to Twilight’s alleged “not a good role model for girls” Bella Swann. But today, J.K Rowling has soured her brand via high-profile instances of alleged/arguably transphobia and the artistic implosion of the Fantastic Beasts prequels. The Hunger Games never really recovered from A) the box office downturn that showed nobody cared about the politics and B) too many folks seemingly viewing its secret villain as a Hillary Clinton clone and instead voting for Coriolanus Snow in the 2016 election. Meanwhile, The Twilight Saga is just “that fun romance/vampire blockbuster franchise some of us loved a decade ago.

I’m not here to say that The Twilight Saga is some underappreciated classic. I think Twilight is genuinely good, while the sequels are… less good. That said, Breaking Dawn part II’s action climax is perhaps the best super powered mass battle in modern cinema history. All due respect to the Russos, but Civil War and Endgame both needed more decapitations and scenes where wolves drag vampires down a crack in the Earth to a fiery death. The Twilight Saga did more to debunk the notion that women couldn’t front blockbusters than any of its peers, partially because Bella didn’t need to kick ass to break records. They have a unique and goofy charm unique unto themselves. They’ve got the fandom, and the money. Maybe it’s time to give The Twilight Saga a little bit of respect.