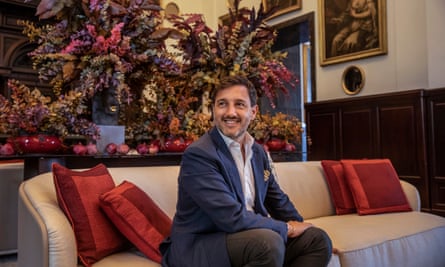 One of the greatest Italian actors, Massimo Troisi, best known for Il Postino, once said that the beautiful Sicilian town of Taormina, where the second season of the multiple-award winning class-war satire The White Lotus is set, had only one flaw: “There are few poor people here.”

It would be hard to find a better spot to set the story about overprivileged, super-rich holidaymakers staying in the Sicilian outpost of the luxury White Lotus resort chain. As with these guests’ sugar-coated existence, Taormina – which sits on a hill facing the Ionian sea, boasting a breathtaking view of Mount Etna – can feel like an artificial bubble compared with neighbouring settlements on the island, which is one of the poorest regions in Europe.

Both seasons of the HBO series have been filmed in Four Season hotels, the first in Hawaii. For the second, which begins on the US streaming service on Sunday, the San Domenico Palace, a former Dominican convent with origins dating back to 1374, was chosen.

“The producers of The White Lotus visited about 70 hotels before choosing ours,” Sonia Bonamassa, the hotel’s public relations coordinator, told the Observer when we visited. “And, for them, it was love at first sight.”

No wonder: the San Domenico Palace exudes luxury and elegance from all the medieval pores of its walls. The suites, many of which have a private swimming pool, are built in the cells that once housed the monks.

Here, the ordinary clientele isn’t all that different from the one represented in the award-winning comedy-drama. The entrance is a hustle and bustle of wealthy, fashionable American and British visitors. Previous guests included Oscar Wilde, King Edward VIII, Elizabeth Taylor, Truman Capote, Audrey Hepburn and Sophia Loren.

The general manager, Lorenzo Maraviglia, spent months with the crew and actors who stayed at the hotel during the filming from February to April last year.

“It’s impressive how Mike White [the show’s creator] managed to get into the details of the life of a large hotel,” he says. “The life they depict inside a luxury hotel is very real – obviously, in some cases very extreme, because they have to create the drama. But in this second season, certain dynamics between the personnel and the client are totally true. I repeat, these excesses do not reflect reality, fortunately, but many things are true.”

The general manager of the White Lotus resort is the dominant character in both seasons. Maraviglia says that he daily finds himself dealing with similar situations to that of Murray Bartlett, who played general manager Armond in the first season.

“This is why I say that the dynamics are real, at least for 95% of what you see – above all this year, because in the last two years people did not travel due to Covid. So, in this last year, expectations from the customer have been even higher because we are talking about a larger economic investment. You see, even though the people who come here spend a lot and have exceptional economic means, they, too, have a sense of money and how much they spend.

“Here, in the high season, a customer spends an average of €3,000 to €5,000 per night. And a billionaire customer understands the value of what he is paying for. So the expectations are very high.”

Our job is to enter our guests’ worlds, their lives, and manage the most complicated egos

Just like at White Lotus resorts, guests expect a peerless stay, without the slightest flaw, setback, difficulty or error. “It is obvious that unexpected issues can happen. The egg arrived a little late, the cappuccino did not have the amount of cream they wanted. And here, maybe they start to tell you, ‘You ruined my vacation’. So, in the end, the majority of my time is managing these dynamics, like ‘Why was there so little cream in my cappuccino?’.”

Like Armond, Maraviglia explains that his job is to reach a very high level of empathy, to try to understand what lies behind the discontent of his wealthy customers. “It certainly can’t be the lack of cream in the cappuccino that ruined their holiday,” he says.

“There is something behind it, there is a frustration with their families, or probably the challenging years under the pandemic. This is why our job is to try to understand the real reasons and try to enter their world, their lives, and manage the most complicated egos.”

The hotel manager of Sicily’s White Lotus, Valentina, is played by Sabrina Impacciatore. Maraviglia, who spent about a month with Impacciatore, said the actor tried to learn how a real manager interacts with customers.

“She was here, next to me, in the office,” says Maraviglia. “She sat there studying me. She wanted to see how I held meetings, how I interacted with the staff, how I behaved when I had to discuss a personal matter with customers. She became the character.”

But if, inside the walls of the San Domenico Palace, the staff can’t wait to watch the second season of The White Lotus , out in the town’s quaint streets few people know of the show, which has not taken off in Italy yet.

“I didn’t see the first season,” says Eugenia, who owns a bar near the train station. “Although I live five minutes from Taormina, I don’t visit it often. Sometimes I go for a pizza or an ice-cream with my family. But nothing more. The costs are too high for ordinary people.”

The town, due to the high prices of its hotels and restaurants, is inaccessible to most Sicilians.

“I heard they were shooting a series about the rich,” says a street artist who exhibits her works at the entrance to the Greek theatre there. “Well, let’s hope you attract more rich people here. The better for us!”