The Nightingale to In Bruges: the seven films to watch on TV this week | Television & radio 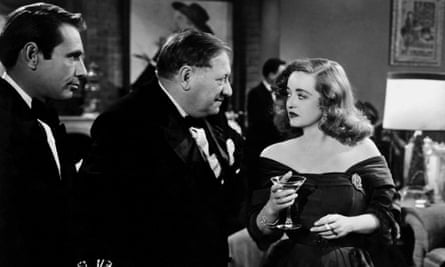 Pick of the week

After the straightforward chills of The Babadook, Jennifer Kent turned to more fact-based horrors for her next, equally affecting film. Set in 1825 in Van Diemen’s Land, AKA Tasmania, during the so-called Black War, it’s a brutal, harrowing tale following Irish convict Clare (a heart-rending Aisling Franciosi), married with a baby and forced to serve a rabble of racist colonial soldiers. Her mistreatment by its British commander, Lt Hawkins (Sam Claflin, oozing disgust), leads to a devastating act of violence, one that sets her on a quest for revenge. In the process, Clare finds common ground with her Indigenous guide, Billy (Baykali Ganambarr), whose people are facing genocide.
Saturday 15 October, 11.20pm, Film4

“Fasten your seatbelts. It’s going to be a bumpy night.” Joseph Mankiewicz’s delicious drama of backstabbing in the theatre world could equally apply to the Hollywood that produced it, with an ageing actress sidelined by a younger one. Bette Davis is magisterial as grande dame of Broadway Margo Channing, who takes young fan Eve (Anne Baxter) under her wing only to find she’s a cuckoo in the nest. The gender politics may not stand up to today’s expectations, but there’s a wealth of lively characters to enjoy.
Saturday 15 October, 10.55pm, Talking Pictures TV

Not bothered that this is their seventh sequel (they even sing a song about it), the felt favourites return with a pleasurable comedy centred on the travails of Kermit. His doppelganger, master criminal Constantine, plots with Ricky Gervais’s Dominic Badguy (the clue’s in the name) to dump the frog in his Siberian gulag while he takes the Muppets on tour as cover for a series of heists. There’s the usual astounding array of celeb cameos (Usher is an usher; Christoph Waltz waltzes), Tina Fey has a blast as a prison guard, and Bret McKenzie pens more nimble tunes.
Sunday 16 October, 2.15pm, BBC One

Night of the Kings

Inspired by Scheherazade in The Arabian Nights, but with elements of Greek tragedy, Philippe Lacôte’s sweaty, immersive drama throws us into a jungle prison in the Ivory Coast where the convicts rule. Ailing boss Blackbeard (Steve Tientcheu) chooses a new Roman – a griot-style storyteller – picking a recent arrival (Bakary Koné), who soon realises that when his tale is told he will be sacrificed. Roman’s story of ancient monarchs and criminal antiheroes is a fascinating mix of oral tradition, movement, song and role-playing, in a film that borders on the mythic.
Sunday 16 October, 1.35am, Film4

Richard and Mildred Loving were a couple in 60s Virginia who defied a state law against interracial marriage and then took their case all the way to the Supreme Court to legally let them stay together. Jeff Nichols’s moving version of their tale revolves round Joel Edgerton and Ruth Negga’s exceptional performances as the devoted pair. He plays a man of few words, reluctantly in the spotlight; while she shines with optimism but, being Black and female, is more aware of the dangers they face. SW
Tuesday 18 October, 11.45pm, BBC Two

With the superb The Banshees of Inisherin due in cinemas on Friday, Film4 has scheduled Martin McDonagh’s three previous films for your consideration – Seven Psychopaths follows this movie, while Three Billboards Outside Ebbing, Missouri is on Thursday. The thriller In Bruges showcases the writer-director’s darkly comic style perfectly, with Colin Farrell and Brendan Gleeson (also paired in The Banshees) as bickering hitmen holed up in the touristy Belgian city after a job goes wrong. A film that deftly balances its gangster genre trappings with a sharp, farcical wit. SW
Wednesday 19 October, 11.35pm, Film4

Jean Dujardin of The Artist fame stars in this surreal yet weirdly believable French black comedy about a man obsessed with a coat. Georges (Dujardin) blows all his money on an expensive deerskin jacket and then takes up residence in a mountain hotel, where he conceives a plan to rid the world of every other jacket. He’s a pathetic character, but it’s grisly fun watching his warped mission, as he convinces local bartender and would-be film editor Denise (Adèle Haenel) that he’s a movie-maker, implicating her in his increasingly gruesome exploits. SW
Friday 21 October, 12.30am, Film4