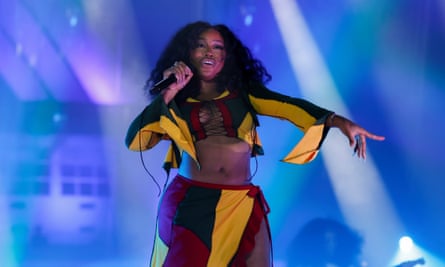 Hello and welcome to the Guide helmed, in Gwilym’s absence, by me this week. As well as being the 62nd Guide to ever grace your inboxes, it is also one of six more editions before 2022 finally comes to an end (maybe it’s the constant flow of British prime ministers, but it does feel like it’s been going for a while now, right?).

But just because the John Lewis ad is out, America is celebrating Thanksgiving and we’re about to be deluged by tinsel and Christmas films, don’t assume that culture is done and dusted. Below you’ll find some final music, TV and film releases to put in your diaries before the end of the year, before the business of end-of-year lists and – of course – looks ahead to 2023 begin. We’ve also got our book of the month, and all of our regular cultural goodness below.

White Lung – Premonition
2 Dec, Domino
Arriving a whole three years after it was originally slated, the fifth (and final) LP from Canadian punk rockers White Lung has been inspired by experiences as varied as motherhood, sobriety and the assorted political crises of the past few years. Expect snarlingly anthemic choruses, off-kilter melodies, and much raging against the machine from this swan song for the acclaimed three-piece.

Nakhane – Leading Lines
16 Dec, BMG
The new EP from the South African pop experimentalist, LGBTQ activist and all-round creative force (they’ve also moonlighted as a novelist and actor) is all about sensual and sumptuous delights, as singles including My Ma Was Good – high on 90s house theatrics – and the Perfume Genius-featuring, disco-inspired Do You Well have shown. If White Lung are liable to have you spoiling for a fight, Nakhane will surely have you making peace with the universe – and yourself.

SZA – SOS
Date TBC, RCA
Almost a year after the release of the TikTok-fuelled breakup banger I Hate U – and with a clutch of recent features under her belt – it seems that SZA’s (above) extremely long-awaited follow-up to CTRL is almost here. “I’ll believe it when I see it”, you may well say, considering how the long rumours have been swirling, but it seems SOS will be arriving this side of 2023, with an SNL appearance set for 3 December. You officially have our permission to get excited.

Litvinenko
9 Dec, ITVX
David Tennant (above) is near-unrecognisable as he transforms into the bald, gaunt double of former Russian spy Alexander Litvinenko, whose infamous death in London in 2006 put the subject of Russian poisonings into the public consciousness in Britain. The four-part drama comes at a time where Putin’s military operations are rarely out of the headlines, and is likely to prove a prescient study of geopolitical tensions. While you’re checking out ITV’s new streaming platform, do keep an eye out for Riches (22 Dec), which has been billed as the black, British answer to Succession.

I Hate Suzie Too
20 Dec, Sky Atlantic/Now in the UK; 22 Dec, HBO Max in the US
The first series of Billie Piper and Lucy Prebble’s dramedy – inspired in part by the former’s own experiences of adolescent stardom – was an anxiety-packed cocktail of tabloid-fuelled scandal, family breakdown, and dangerously spiralling emotions. This three-part follow-up sees Suzie seemingly on the up with a new reality TV gig – but will she get the public acclaim she so desires?

Emily In Paris
21 Dec, Netflix
No, wait, where are you going?! Stay with us for a minute … Emily In Paris used to be hatewatch TV. You probably remember when it first aired and people started saying things like “oh my god, what has happened to TV” and “but why don’t any of these French people speak any French?” That is all, luckily, in the past, with the second series of the Lily Collins-fronted series defiantly cocking a snook at its protagonist and – quelle surprise – letting the français flow. Roll on season three.

White Noise
30 Dec (Netflix) and selected cinemas
Noah Baumbach, Adam Driver and Greta Gerwig. Are these three names not reason enough to think this might be the best sort-of-indie-but-totally-indie film you watch this year? If not, then perhaps the plot will help. This blackly comic adaptation of Don DeLillo’s 1985 novel sees Driver and Gerwig play a couple who flee their home after a freak accident with their band of children (because what doesn’t say “fun family roadtrip” like staring down the possibility of your impending death?) Sold!

Avatar: The Way of Water
16 Dec
This sequel to James Cameron’s epic sci-fi creature feature has been in development so long that it makes some of the aforementioned delays look positively minor (it was, for instance, supposed to be released three years before SZA’s first album came out). It’s finally here, however, and will be hoping to dazzle you with its spectacular CGI visuals (and so it ought to, as one of the most expensive films ever made).

I Wanna Dance with Somebody
30 Dec in the UK; 21 Dec in the US
Naomi Ackie (above) has come a long way from her TV debut in a 2015 episode of Doctor Who, and is now the star of this Whitney Houston biopic, which also sees Stanley Tucci take a break from eating delicious food on TV to play music biz supremo Clive Davis. As she transforms into the pop legend (complete with Houston’s original vocals), can it rival the (surprisingly emotional) Elvis in the music biopic stakes, or will it be a glossy karaoke session?

If you want to read the complete version of this newsletter please subscribe to receive The Guide in your inbox every Friday.