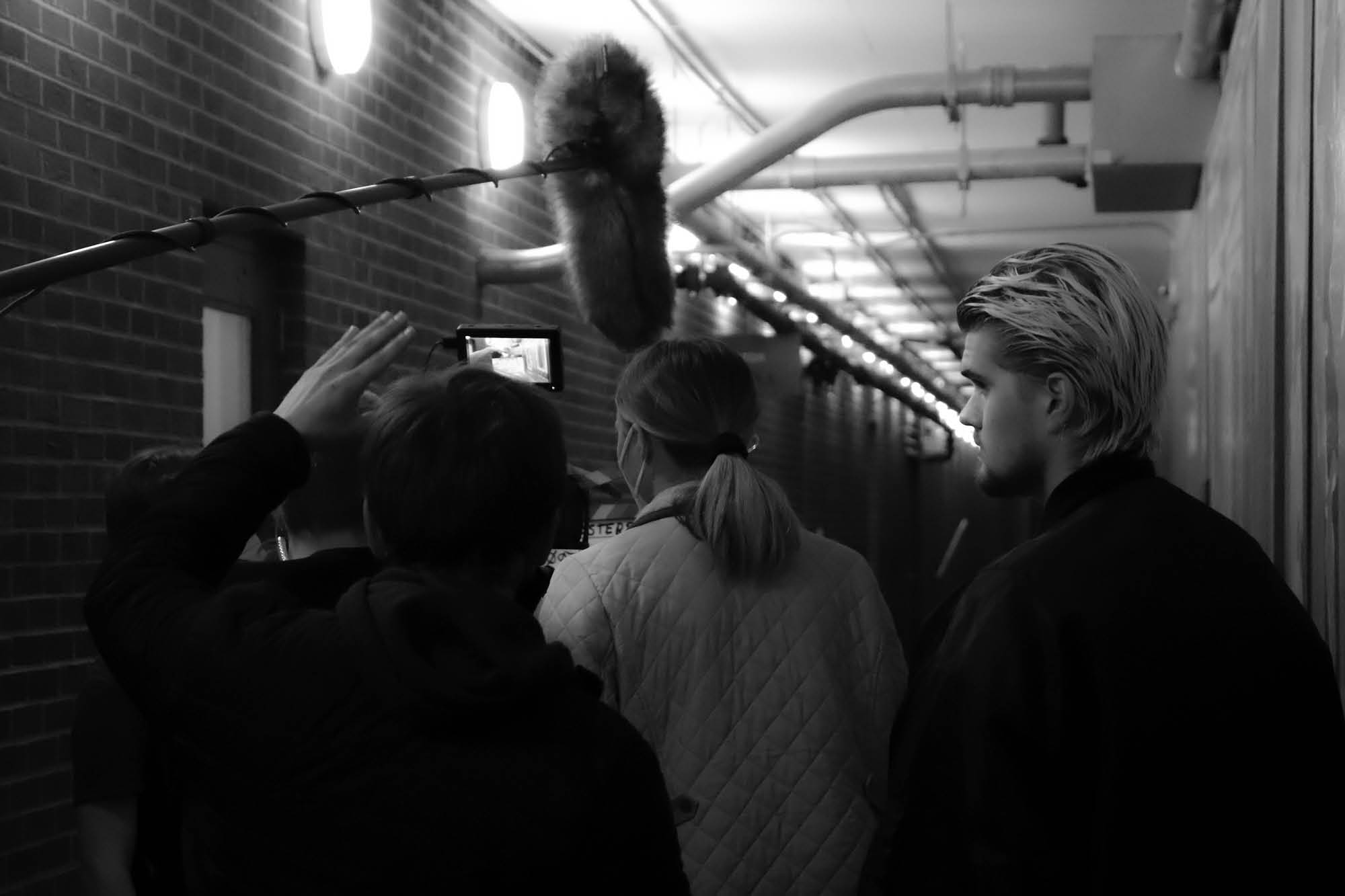 When UNCSA launched its film school in the fall of 1993, movies were king. Blockbusters
like “Jurassic Park” were bringing audiences out to a growing multiplex theatrical
market, while an independent cinema boom, driven by the rise of directors like Steven
Soderbergh (“sex, lies and videotape”), Quentin Tarantino (“Reservoir Dogs”) and John
Singleton (“Boyz N the Hood”), was opening up film to a whole new generation.

Meanwhile, at home, families were clocking most of their television hours in front
of sitcoms like “Home Improvement,” “Seinfeld” and “Grace Under Fire.” Though ABC
was prepping the launch of “NYPD Blue,” the police drama series that would plant some
of the earliest seeds of a new golden age for the small screen, television was still
very much seen as a lesser medium. It certainly wasn’t anywhere near today’s realm
of

“Peak TV,” to steal a phrase from FX Networks Chairman John Landgraf, and it wasn’t
a production paradigm that a new film school was likely to focus on, either.

By the end of the decade, HBO’s mafioso epic “The Sopranos” would change the TV game
in a big way, sparking a period of evolution and growth for the medium throughout
the 2000s. A rising tide of cable networks, including AMC, FX, Showtime and TNT, packed
their offerings with distinctive episodic series that kept viewers coming back for
more.

Thanks to the advent of online streaming, the audience for serial entertainment has
exploded. Since 2013, when Netflix broke ground with the political drama “House of
Cards,” the number of new scripted television series has nearly doubled. In 2021,
as the COVID-19 pandemic continued to drive interest from an at-home audience, a record
559 shows debuted on screens across the U.S. and Canada, according to data by Statista.

In a reflection of these industry trends, creating work for the small screen is now
an important part of the training at the School of Filmmaking at UNCSA.

“About six years ago, when I first came to UNCSA, it was still very feature-centric,”
said Peter Werner, a member of the film school’s graduate screenwriting faculty who brought decades of experience directing series like “Moonlighting,” “Justified”
and “Grimm” with him. “Because of my background in television, it was clear to me
that this is where the jobs are.”

Since that time, the volume of training for television work has skyrocketed at UNCSA.
It’s even become a note in onboarding; one of the things Werner says the school asks
of new students, just to get a gauge, is whether their interests lie in feature or
series development. At least 50 percent express a preference for being part of a writers
room on a series over scripting a studio feature.

“All the students talk about is ‘Euphoria’ or ‘The Witcher’ or ‘Bob’s Burgers,’” Werner
said. “They’re not talking about 90 percent of the feature market.”

Following industry trends is one thing, but it’s also important to work toward versatility
in how students are generating their material. Lauren Vilchik, assistant dean of graduate studies, notes how the film school’s entrepreneurial
focus has begun to include a multipronged approach so that students can be quick-footed
and able to pivot — increasingly important in an industry where development executives
often wonder about serialized versions of the submissions they’re receiving.

I teach financing and independent filmmaking and raising equity, and the business
plans used to be, you would put together a fundraiser for a feature. Now, we put together
a fundraiser where you pitch the same story for different modalities. … It’s about
getting students to wrap their minds around that.

“I teach financing and independent filmmaking and raising equity, and the business
plans used to be, you would put together a fundraiser for a feature,” Vilchik said.
“Now, we put together a fundraiser where you pitch the same story for different modalities.
What’s the VR experience that can act as a marketing tool for the feature? Think of
the feature as the pilot. What’s the story, long-form or short-form? Why wouldn’t
there be a limited series version of a feature script? It’s about getting students
to wrap their minds around that.”

That kind of creative malleability came in very handy for screenwriter Travis Beacham,
who wrote the feature fantasy screenplay “A Killing on Carnival Row” during his fourth
year at UNCSA, in 2004. When he graduated the following year, he was fortunate enough
to sell the project to New Line Cinema. But for the longest time, Beacham’s murder
mystery, set in a Victorian-themed city of fantastical creatures and humans, languished
as filmmakers like Guillermo del Toro and Robert Zemeckis merely flirted with bringing
it to the big screen.

“It just seemed like the sacrificial lamb, this thing that I love dearly that had
to die to give me my career,” said Beacham, who went on to write the scripts for “Clash
of the Titans” and “Pacific Rim.”  “At some point along the way, Thomas Tull, the
head of Legendary Pictures, gave me a call and said he was thinking about buying it
from New Line and asked if I could see it as a TV show.”

Beacham had indeed been thinking along those lines. He recalls taking an interest
in television when he was in film school, as shows like “Lost” and “Deadwood” began
to reveal the possibilities of world-building on the small screen. Bolstered by more
recent successes like “Game of Thrones,” he dug back into his feature script and expanded
it for a season of genre television. It finally debuted as “Carnival Row” on Amazon Prime in 2019, 15 years after Beacham had conceived it.

“I think it helps, as a TV show, just fleshing out the characters and giving them
the space to develop and figure out who they are,” Beacham said. “In features, you’re
so limited that you never really get to be character-driven. You never get to that
level where you can really delve into a character’s psyche.”

The film school’s series focus culminated this year in the graduate program with the
first full soup-to-nuts realization of a serial production. Until then, the work had
remained mostly on the page. But with “Masterpiece,” a six-episode series about a struggling violin student who finds musical inspiration
in committing violent acts, there is a finished product to showcase.

Behind the scenes of “Masterpiece,” a six-episode series made in the School of Filmmaking
during the 2021-22 academic year. The series is the result of a first-time collaboration
between the undergraduate and graduate filmmaking programs.

“My big vision for the grad program was to be development-focused,” Vilchik said.
“Students would prove concepts, and then they would interact with the undergrads,
who mostly would crew for grad projects. This is the first time we were able to pull
that off.”

After the initial concept was pitched by second-year graduate student Sarah Deitrich,
who then became the showrunner, the series was developed by students in the “Writers
Room” elective course. Vilchik then reached out to third-year undergraduate producer
Rohit Lila Ram, who came on board to shepherd “Masterpiece” through a lightning-fast
production.

Lila Ram brought in third-year student director Brady Walker, as well as alumnus Jim
Boemio (B.F.A. Filmmaking ’20), to helm the six episodes. He also tapped third-year
student cinematographer Summer Sierra, who would find herself dealing with an unexpected
but eye-opening situation during the shoot.

“The biggest challenge was that we would be shooting multiple episodes in one day,
which meant scene by scene, I’d be switching off which director I was working with,”
Sierra said. “The pace of our work was hard to adjust for sometimes. It was a learning
curve.”

According to Gilana Lobel, a 2005 graduate of the school’s producing program who has worked as a production coordinator and production manager on series like
“Person of Interest” and “Russian Doll,” that kind of deep-end training is perfect,
because it reflects real-world television production.

“My first job was on an episodic television show, and I didn’t know that they rotated
episodes, that they weren’t filming everything all at once,” Lobel said. “But that
was network television back then. Now that you have all of the streamers, you have
a lot of shows that are all cross-boarded, filmed like a feature, where you’re filming
out locations (shooting everything that takes place there before moving on), and you’re
not focused on the full structure of an idea of the episode. You’re filming everything
all at once.”

It’s all about instilling a knowledge base and familiarity in students who are heading
out into a constantly shifting professional landscape. “It is our job to prepare students
not only for the industry of today, but for the future,” said Deborah LaVine, who became dean of the School of Filmmaking in July 2021. “Our goal is to be a space
to shift paradigms, not just follow trends. The proliferation of streaming and the
advent of so much beautiful work in this area is a wonderful opportunity for our students,
and one that exists in synchrony with our training in the process of creating short
and feature-length films.”

Kristopher Tapley (B.F.A. Filmmaking ’04) has covered the film and television industry
for 17 years, with bylines at Variety, The New York Times and The Times of London.
He now works as a writer and a consultant in Los Angeles, where he lives with his
loving wife, lively son and lazy cat.

This article appeared in the 2022 issue of Scene.
READ THE COMPLETE ISSUE