A photographer captured the aurora lights and the Orion constellation in one spectacular image using a novel method.

Roi Levi’s magical shot, taken in Iceland, was only achievable thanks to a new shooting technique.

Visible around the stars in the image is red hydrogen dust that was captured on a Canon EOS Ra, designed for astrophotography, with a special nebula filter attached, the H-alpha. 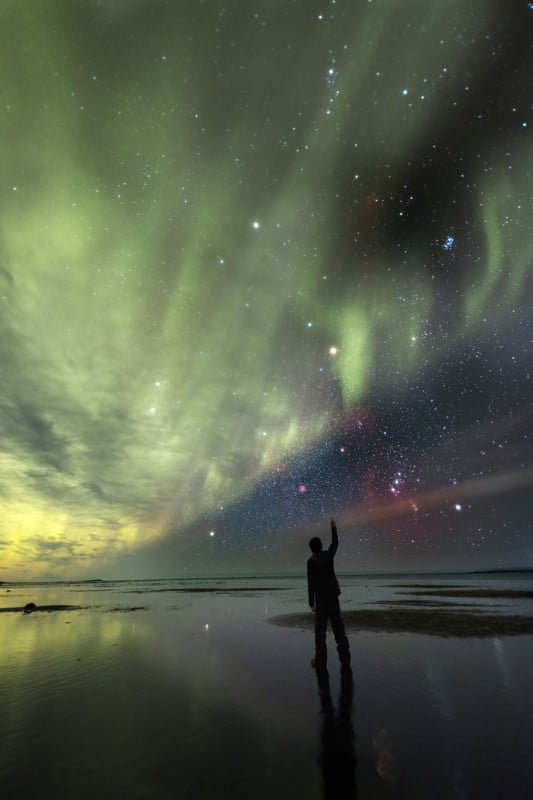 “I wanted to take things to the next level and do something no one has ever done before,” he tells PetaPixel.

“I decided to go Iceland and use the new filters and gear from my sponsors Optolong and Idas H-alpha filters and I had an idea to capture the aurora northern lights together with celestial objects,” he says.

“I just knew if I planned the image alignment right it will allow me to see Orion and the aurora in the same frame.” 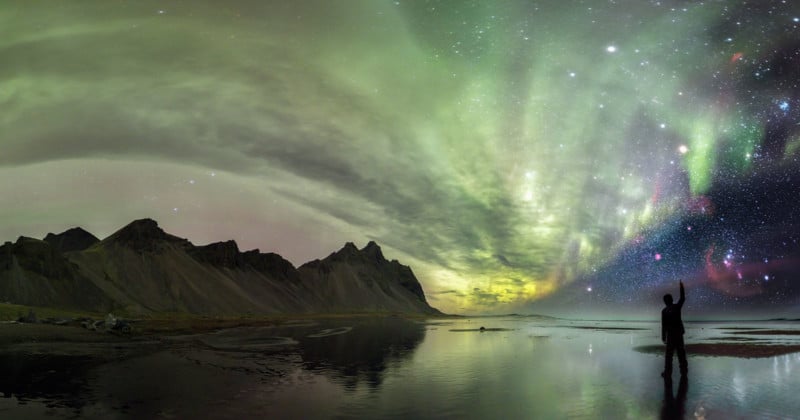 Roi says he used the PhotoPills app to align his lens with Orion while on location near Vesterhorn mountain in Iceland.

Levi captured the two natural phenomena by shooting with the H-alpha filter and without the filter, meaning he never had to move the tripod.

“I used PixInsight for stacking 10 H-alpha frames and processing the image and then the final curve on Photoshop,” he says.

“There is a full colorful universe in the dark skies, and we need to know which filters to use to pull out these dim frequencies in the night skies and to properly expose the hiding gems of the skies for a much better landscape image.”

The shot was almost spoilt by cloud cover with only the Orion fully visible and the aurora dancing in between the clouds.

“Some will say it is even more special with the clouds behind,” he adds.

Levi’s efforts paid off as he was honored by NASA who picked it for their Astronomy Picture of the Day and was also recognized by the European Space Agency (ESA).

Levi’s other photos from his trip to Iceland are also fantastic. The Israeli is a hyperlapse cinematographer by day and an astrophotographer by night.

He conducts photo workshops and is planning new photo tours with his special filters in Iceland.

“In 2023 we are making tours in California, Utah, Arizona, New Mexico, Yellowstone, Jordan, Israel, and Iceland.”

Update 11/22: The story has been edited to clarify that the photo was taken with a unique method rather than the assertion that the subjects in the photo were captured together for the first time.