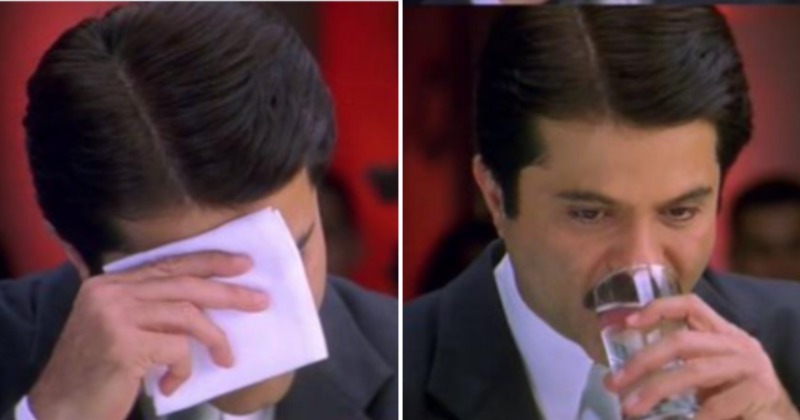 It has been over two decades since the S. Shankar directorial movie Nayak was released. However, due to its massive popularity and regular re-runs on television, the movie still remains quite famous among the masses.

Starring Anil Kapoor, Rani Mukherjee, Paresh Rawal and Amrish Puri in important roles, the political drama was all about a news journalist who becomes a chief minister for a day and tries to change the scenario of the country.

However, the movie has suddenly come to the limelight once again after netizens found a particular scene from the movie which has now become a butt of jokes.

This scene shows Anil Kapoor nervously wiping his forehead with a handkerchief and drinking water and four snapshots of this ‘anxious scene’ have flooded the internet. This scene occurs when Puri, who played the role of the chief minister was interviewed by a journalist, played by Kapoor in a newsroom. After the journalist was challenged to become a CM for one day, he was dumbfounded by the proposition.

Here are some good jokes and memes :

When you are not sure if the captcha is either Captial i or small L pic.twitter.com/ES9K2qydqA

When your dad taking your maths test. pic.twitter.com/lYA8vqj5Jp

When you receive an email marked “Urgent” on Friday evening pic.twitter.com/WzORMSgcMG

When you did something wrong and someone says ‘idhar aao kuch baat karni hai’ pic.twitter.com/GbKWXBAYNc

When you take some money from your dad
To buy book and suddenly next day dad ask about the book pic.twitter.com/IPQkV2cZ0g

After talking on the phone, When Dad started checking your phone instead of giving you back pic.twitter.com/PC4TGdFD4R

Me after successfully deleting the post which had typo errors few seconds after uploading it:#agencylife pic.twitter.com/Uxvh2v09kH

You, when your friend’s mom calls you to give the phone to the friend who used you as an excuse and is actually somewhere else pic.twitter.com/05lMx9ceR9

When you are on diet but mumma deliberately serves you an aloo ka parantha w extra butter pic.twitter.com/l31zaCSb4j

The film Nayak has released in the year 2001. It is a remake of S. Shankar’s successful Tamil film ‘Mudhalvan’. Nayak failed at the box office, as per sources it was because of poor marketing but it has a huge gan following considering the continuous re-runs on television. However, it was one of the most expensive films to be completely shot in India.