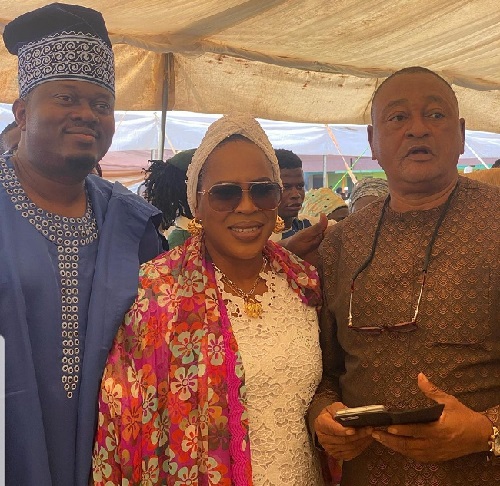 The Nigerian Governors Wives Forum (NGWF) and stakeholders in the movie industry, including movie makers and actors are set to partner in a bid to tackle drug abuse and gender-based violence.

With a focus on the entertainment industry, movie producers and actors were urged to use their movies, contents among others to discourage many Nigerian youths who have been neck-deep in drugs.

Kate Henshaw, Timi Dakolo, Dija, Toyin Abraham Ajeyemi, Ali Nuhu, and Ifeoma Fafunwa were among the speakers who enumerated points and steps that could be taken to tackle the scourge during a webinar moderated by veteran actress Joke Silva.

The First Ladies praised the webinar’s purpose while highlighting the work of the Nigerian Governors Wives Forum over the past year, and expressed hope that all of the speakers’ messages would be implemented and that everyone could work together to end the country’s growing drug epidemic among young people.

Nollywood Actor Ali Nuhu explained the challenges for drug use in the northern part of the country, blaming it on poverty and societal pressures.

He also mentioned that forced marriages, which are performed by families before their children hit adulthood, are a major source of gender-based violence. He emphasised the importance of greater awareness initiatives and reorientation programs in the north especially the grassroots communities.

Mrs Toyin Abraham Ayeyemi and Timi Dakolo’s messages focused on celebrities’ usage of social media, stating that entertainers must lead by example because a significant proportion of the younger population and their fan base follow every move they make and emulate their lifestyles, which are sometimes fictitious.

They advocated for increased government engagement as well as the use of more mediums to continue disseminating the anti-drug message. Mrs Ifeoma Fafunwa, a playwright and director, urged the first ladies to continue to support the dissemination of drug abuse and gender violence messages.

She said that women play huge roles in cultural trends and how society is reflected in our daily lives. She also proposed that the campaigns start with secondary school students since there is too much emphasis on colleges and universities when starting with the younger ones may go a long way in preventing these difficulties and instilling in them to know the difference between right and wrong.

Dr Mrs Olufolake Abdulrazaq, First Lady of Kwara, closed the webinar on behalf of the NGWF with a vote of appreciation, commending the speakers and attendees. She also lauded the other first ladies in attendance and extended invites for collaborations to address these challenges.

She discussed the forum’s objectives and its ambitions to launch new initiatives in different states. She also encouraged participants who want to work with their state governments to reach out to their first ladies on social media, promising that requests made through the proper channels will be appropriately attended to.

YOU SHOULD NOT MISS THESE HEADLINES FROM NIGERIAN TRIBUNE

We Have Not Had Water Supply In Months ― Abeokuta Residents

In spite of the huge investment in the water sector by the government and international organisations, water scarcity has grown to become a perennial nightmare for residents of Abeokuta, the Ogun State capital. This report x-rays the lives and experiences of residents in getting clean, potable and affordable water amidst the surge of COVID-19 cases in the state.    Nigerian govs wives forum, entertainment stakeholders collaborate to fight drug abuse, gender-based violence