Movie Box Office Numbers Will Never Be The Same 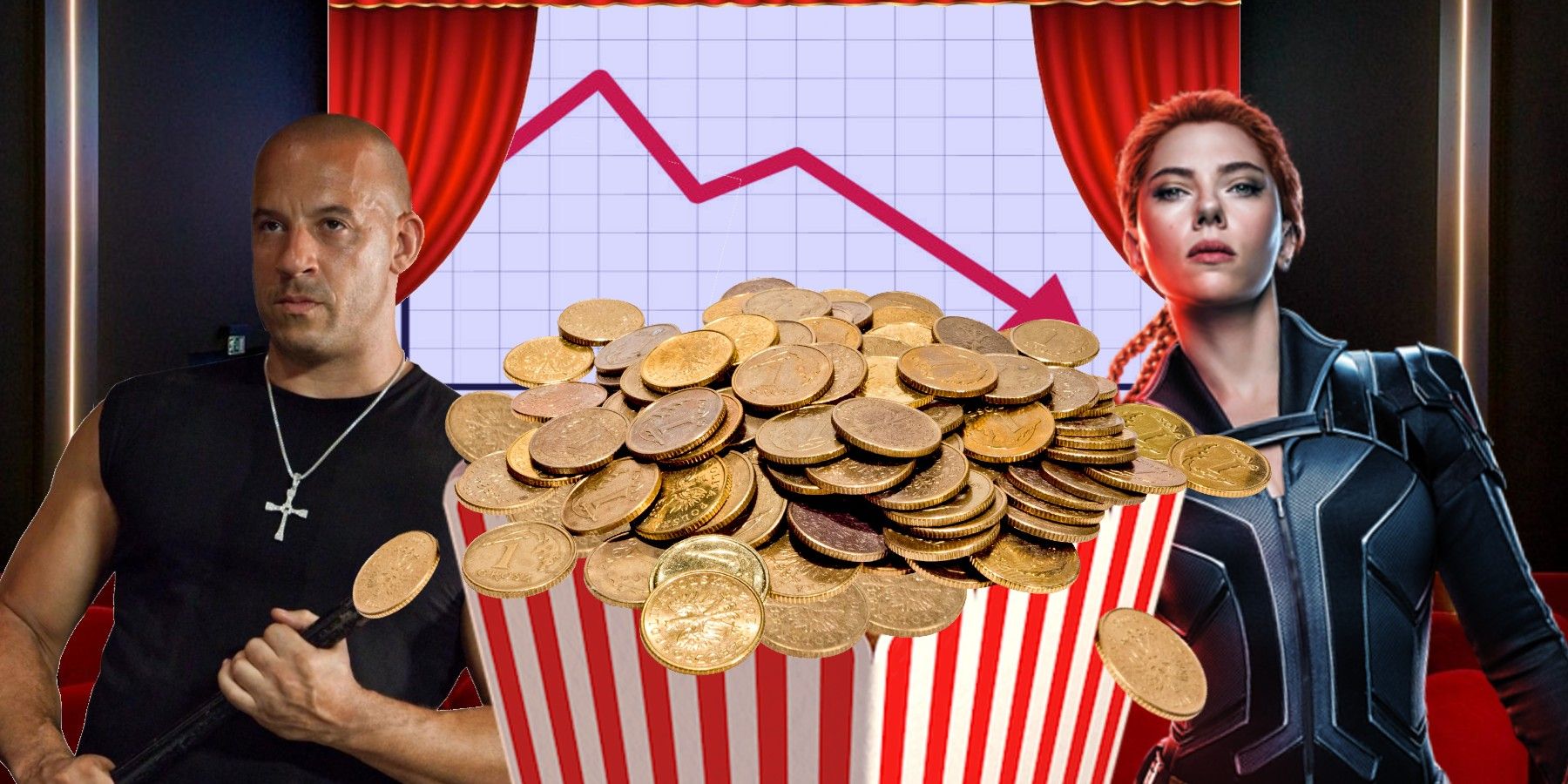 The box office is roaring back in 2021 thanks to movies like F9 and Black Widow, but the post-pandemic box office will never be the same as it was before coronavirus hit the world in 2020. While COVID-19 wasn’t friendly to many industries, it was especially rough on theaters. Thanks to a combination of movie delays, capacity restrictions, public health caution, and a variety of other factors, theaters came to a grinding halt, posting the lowest box office in decades, a blow the industry may never fully recover from.

Fortunately, with vaccines available and infection rates decreasing in most areas, theaters are opening back up, big movies are releasing, and people are comfortable returning to public, so a strong recovery is underway. Box office results aren’t comparable to pre-pandemic levels, and not even to each other yet, really, since so few big movies have been released post-pandemic, making it hard to compare with such a small sample. The situation is also still evolving, creating different circumstances for each release. Even so, there are box office wins to be reported, which is a good sign at a strong early recovery.

Still, the damage done to theaters, industry changes in response to the pandemic, and a higher level of concern and awareness about public spaces means a full box office recovery doesn’t seem likely. Theaters and the theatrical experience will likely survive, but considering theater attendance had already been declining for almost 20 years before the pandemic, 2019 box office numbers were always going to be hard to reach again, even if coronavirus never happened.

The box office has always been used as a sort of measurement for the success of a movie, but it was always a flawed measuring stick. Box office records are interesting anecdotally but don’t hold much relevance when any mathematical scrutiny is applied. Factors like inflation, marketing spend, population changes, and more already made year-over-year comparisons fairly moot. Adjusting for inflation seems like an easy fix, but changes in ticket prices don’t make those numbers fair either. Even comparing the number of tickets sold isn’t relevant due to expanding markets, particularly with the growing international box office, which now typically accounts for most of the box office hauls from blockbusters.

Besides that, box office occupies a weird place in the movie conversation. It only has a tangential relevance to movie quality and isn’t even the full picture when it comes to monetizing a movie. Box office is split up between the studio, financiers, and exhibitors, and product/brand deals, merchandise, and the home market are all big impacts on the success of a movie. While box office has a place in the conversation about industry health, its use as a part of the weekly horse-race between new releases never made any sense, but hard data is easier to grasp than more abstract aspects of movies, and studios love to hype up big numbers in marketing as a form of social proof. As the popularity of streaming grows, the ability to use box office as a comparison metric between all current releases is diminished, hopefully leading to more discussions of quality instead of simply relative market performance of a given movie.

One major box office factor to remember is theatrical attendance was already in decline long before the pandemic hit. The box office was posting bigger and bigger revenues each year due to higher ticket prices, but overall attendance was always falling, and ticket prices can’t increase to cover the difference forever, especially with the growing competition of streaming.

The pandemic likely accelerated that decline in a massive way, such that a full recovery – which was never likely to hit pre-pandemic levels in the first place – would likely mean getting back to the appropriate place on the same pre-pandemic downward trajectory. Moviegoers who were losing interest in theater attendance are only going to be less enthusiastic after the pandemic, but with permanent theater closures and the trend towards more premium seating (and therefore reduced capacity), there are also a number of additional factors naturally lowering the ceiling on theater attendance.

Post Pandemic Box Office Will Never Be Comparable to Pre-Pandemic

The pandemic forced Hollywood, the theatrical industry, and audiences to make some rapid structural and behavioral differences, resulting in an environment that precludes comparisons between the two eras. Even if we return to regularly seeing billion-dollar blockbusters, the circumstances surrounding that kind of haul will be so drastically different it’ll be impossible to determine how much more that same title could have earned pre-pandemic. For example, both F9 and Black Widow‘s box office performance is better than some previous movies in their respective franchises, so at a casual glance they could be right where they should be. Black Widow is performing better domestically than Ant-Man and the Wasp was at this point in its run in 2018, but Black Widow is a bigger character, has a summer release date, and every movie since Ant-Man and the Wasp has crossed $1 billion globally, not to mention more structural changes in the industry we haven’t seen the full impact of yet.

Thanks to theater closures, a number of theatrical films saw streaming releases during the pandemic, resulting in a reduction in box office windows, meaning theatrical exclusivity will be shorter and movies will go to streaming sooner. This doesn’t only suppress end-of-run ticket sales (admittedly a small portion of total gross), but also pushes more on-the-fence moviegoers closer to the “wait for streaming” crowd. Streaming revenue was already slated to surpass box office revenue before the pandemic, and the shorter windows shifts that line even more.

Post-pandemic box office numbers may not mean much for a while until the industry settles on a new normal, which may make it hard to evaluate box office results since there’s too many external factors impacting every movie in different ways. If there’s a bright side to all this, though, maybe it’ll help create discussions about movies that look at more than the commercial merits before applying any labels of failure or success.

Next: What Do Rotten Tomatoes & Box Office Really Say About a Movie’s Quality?

Sweet Girl: Every Clue To The Big Rachel/Ray Twist

Stephen has been writing for the site since 2016 and enjoys all manner of movies and TV, especially when it gives reason to obsess over minor irrelevant continuity minutiae.


Stephen has been infatuated with movie magic on screen and off since wearing out his VHS copy of The Making of Star Wars when he was 7. This passion continues in his work as a film journalist, whether it’s hunting down breadcrumbs about the Snyder Cut, breaking down box office trends, or obsessing over Roten Tomatoes data, Stephen lives in the minutiae, as listeners of his podcast, Batman v Superman: By the Minute (with fellow-Screen Rant editor Andrew Dyce) know all too well.


When he’s not writing on the site, Stephen can be found obsessing over vintage camera lenses, chasing his tiny children around, or getting himself into trouble on Twitter @smcolbert.