Lakeshore Camera Club focuses on technique as much as camaraderie 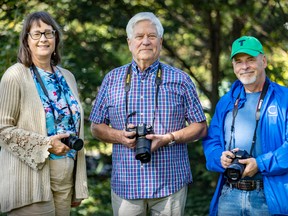 Taking photographs has never been easier or more popular thanks to smartphones and made-for-sharing social media platforms ready to display instant photographs, but composing one that captures a feeling or a moment in time is more elusive — just visit any social media influencer’s site and compare those photos to your own.

Bryan Fritz was always the guy taking photos at work events. It was a way for him to connect with colleagues while indulging in his favourite hobby, which eventually became such a passion that he traded playing Monday night hockey for Monday night photo-club meetings with the Lakeshore Camera Club (LCC) five years ago.

Sign up to receive daily headline news from the Montreal Gazette, a division of Postmedia Network Inc.

Thanks for signing up!

A welcome email is on its way. If you don’t see it, please check your junk folder.

The next issue of Montreal Gazette Headline News will soon be in your inbox.

We encountered an issue signing you up. Please try again

“They have a really good number of experts who provided training and information on how to improve my photography,” Fritz said. “They’re a very supportive, social group of people. You feel like you belong, you’re with friends more than just meeting a bunch of people once a week.”

The club has several interest groups — from natural landscape and fauna to still life, humanity, and urban landscape, as well as a free-for-all expressions group where photographers let their creative selves loose. Regular field trips are organized, such as a recent one to Pointe-Saint-Charles, where about 20 photographers met up.

“People submit a few pictures, and they do a little show-and-tell about them. You learn from others because you’re exposed to really good photographers and you gain experience,” Fritz said.

Though not a teaching organization, the club invites guest speakers, offers tech talks and participates in competitions run by the Canadian Association of Photographic Arts (CAPA), and has won several awards. It also organizes internal competitions and photo-critique sessions.

“I never took it as intimidating; it’s all very constructive criticism. It’s a way of sharing. You’re going up against other very good photographers and it’s a way of improving your own work,” said Philip Colet, who joined last year. His interest was landscape photography, but COVID put a stop to his travelling.

“Around Montreal, there’s not these grand vistas with big mountains and river valleys and the club expanded my horizon to include other genres, like urban landscapes. With all the different genres of photography, you can try your hand and see how it goes.”

The club just resumed in-person meetings at Stewart Hall in Pointe-Claire after meeting online for two years due to the COVID-19 pandemic. About 150 members ages 25 to 85 are active in the LCC, founded in 1953 when cameras were heavy and loaded with black and white film. It’s been around this long partly due to members’ ability to keep up with changing technology.

Jane Melrose joined the club 15 years ago when digital photography was developing rapidly. “It became so much easier to take photographs because getting film developed was so expensive. Digital rekindled my interest,” she said.

Melrose says the social atmosphere is welcoming and keeps her coming back, as do the club challenges: “There’ll be a topic and anyone can submit photos, it’s not a competition, but it gives me a chance to show some of what I’ve been doing. It’s nice to show pictures to other photographers and have them appreciate what you do to get those shots.”

Just before the pandemic, several members began working on a series of photo essays with West Island Citizen Advocacy (WICA) consisting of stories about seniors and the volunteers who work with them. The pandemic put a premature end to that project, but this spring the LCC resumed its community involvement by providing a volunteer photographer at each of the 20 stations of the West Island Cancer Wellness Centre’s (WICWC) Challenge of the Brave, Amazing-Race-style fundraiser.

“I was at the CoCo & Bean coffee shop in Beaurepaire Village, where a member from each team had to learn how to make a latte,” said club president Norm Horner. “It was a personal challenge to capture the energy and enthusiasm of the moment.”

Now that COVID restrictions have been lifted, the LCC is planning to make volunteer photographers available for more community fundraising events. While it’s not their main focus, Horner said such occasions allow members to advance their photographic skills. Fritz said such events add “a bit of pressure to get it right, so it’s a learning experience as well as a challenge.”