‘If you have issues with someone in a place like this, you have to confront them’: why reality TV loves an island | Reality TV 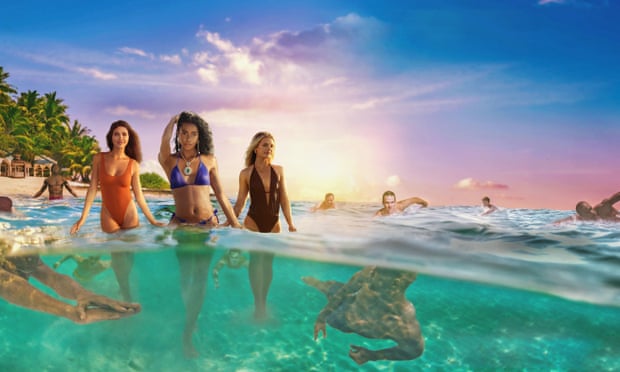 It’s that time of year again: heads are being turned, Prettylittlething.com endorsement deals chased, and we’re hearing the phrase “It is what it is” ad nauseam. That’s right: with sky-high ratings and no shortage of drama, this is Love Island’s summer – and we’re all just living in it.

But over and above the shenanigans at ITV’s Mallorcan villa, reality television seems to be obsessed with islands at the moment. This month, season two of FBoy Island – a bizarre show where women choose between men who describe themselves as “nice guys” and those who identify as womanising “fuck boys” – arrives on HBO Max. Netflix’s Too Hot to Handle – a dating show that transports 10 horny singles to a tropical paradise and bans them from kissing or touching each other – dropped its third season in January. MTV’s Ex on the Beach, which reunites fiery contestants from British reality shows with their exes, has filmed 12 seasons on islands including Crete, Koh Samui, Bali and Gran Canaria.

It’s not just dating shows: Channel 4’s The Island With Bear Grylls has seen various groups battling for survival in an unforgiving tropical terrain. Nude survival show Naked and Afraid was a surprise hit in the US, running for 14 seasons and filming in Fiji, Dominica and Trinidad and Tobago. Last year, Bravo’s Real Housewives franchise branched out into its first “all stars” season, bringing holidaying Housewives together in the Turks and Caicos Islands in the Lucayan Archipelago.

Reality TV’s preoccupation with islands stretches back to the genre’s origins. In 2000, Survivor was the first US reality show to become ratings gold. The Big Brother-in-the-jungle format followed two “tribes” of Americans in Borneo, with 51 million people tuning in to watch its dramatic finale. Today, some of the most popular island-based shows, such as Temptation Island and Love Island, are revivals from reality TV’s early years, beginning in 2001 and 2005 respectively. The same goes for Shipwrecked, the Channel 4 show that was rebooted in 2019 but debuted two decades earlier. In 2008, reality TV’s island obsession was enough of a thing to be mocked in the Milf Island episode of the US sitcom 30 Rock, which revolved around a fictional reality show featuring “25 super-hot moms, 50 eighth-grade boys, no rules”.

Even if contestants aren’t on an island physically, they’re often on one figuratively

Why is reality TV so drawn to islands? June Deery, the author of the 2015 book Reality TV and a professor at Rensselaer Polytechnic Institute in the US, thinks that this type of isolated setting is “inherent” to the medium. “Whether the island is a geographic place, or a socially produced environment, it allows controlled conditions and is a form of narrative creation,” she says. “Hence its attraction for reality TV producers.”

Brian Moylan, an author and commentator on reality TV, agrees that isolation is the most important factor. “It’s about creating an alternate universe, where anything can happen – or more precisely, where a very specific set of things that the producers want to happen can happen,” he says. “Even if contestants aren’t on an island physically, they’re often on one figuratively.” It’s true that on Love Island we rarely see outside the confines of the Mallorcan villa: it’s an island-within-an-island. The winter series is located in South Africa and the mid-pandemic season of Love Island USA was filmed on the top floor of a Las Vegas hotel. If an actual island isn’t a strict requirement on a show with the word “island” in the title, then Big Brother’s famous Elstree compound is surely an island in the figurative sense.

Real or artificial, these islands are ideal for creating conflict. Throw in scantily clad singletons (Too Hot to Handle), alcohol (Ex on the Beach) or exhaustion (The Island With Bear Grylls) and you’ve got a recipe for drama. We see this every year on Love Island, where fans grumble that the show is boring, then complain even more when producers intervene to spice things up. It is also visible on Real Housewives, when the cast of rich women embark on trips to exotic locations. Removing them from their usual surroundings and support systems and filming them round the clock in locations such as St Barts in the Caribbean (now nicknamed “scary island” by fans) have sparked the most intense drama over the years. “If you have issues with someone in a place like this, you have to confront them,” Moylan says. “There’s no escape from the island.”

It is no coincidence that reality TV is enamoured of islands – remote, primal settings – at a time when the world is becoming increasingly digitised and hyperconnected. A lot of these shows are sold as a social experiment, asking whether people can find love, or even survive, without the distractions and amenities of modern life. They allow us to fantasise about how we would cope in these situations. “What would happen if you were stranded on a desert island with a bunch of hot young people who also want a Boohoo contract?” Moylan says. “Love Island asks that very question.”

The journalist Anna Peele, who recently dissected the rise of Love Island for Vanity Fair, says that technology is shifting our ideas of experiences that feel primal or intense. “Modern movies and TV are always trying to come up with reasons to show people not staring at screens,” she says. “Right now, it feels primal to have to communicate directly.” Survival shows make people catch their own food and build their own shelter, while dating shows revolve around sex: the most primal act of all.

It is curious that reality TV – a newer genre, with seemingly infinite possibilities – is so wedded to a setting that has been widely explored elsewhere. From the scripted TV drama Lost to films such as Cast Away, books including Robinson Crusoe, Treasure Island and Lord of the Flies, and even Radio 4’s Desert Island Discs, there is hardly a format where island-based isolation isn’t a common device. In the early years of the reality genre, it made sense that it would choose a setting that felt familiar, where other mediums had done the “heavy lifting”, as Moylan puts it. But two decades on from Survivor and the beginning of the reality TV epoch, the continued reliance on island-style shows feels like a potential point of stagnation, or a sign that new ideas are thin on the ground.

The saturation could also be a sign that, as it matures, reality TV is becoming more like the scripted television, films, books and theatre that preceded it. As with traditional media, editing and storylining have always been a part of reality TV shows. But viewers are now savvier to the ways reality narratives are preordained, and shows are often more blatant about it, too. Love Island is practically a Shakepearean drama, with multiple narratives and characters – villains, heroes and antiheroes – edited to collide on a regular basis. “An isolated setting is about power: the power of producers over participants for purposes of entertainment,” Deery says. “It enables producers to become more like the all-powerful authors of fiction. They become the vigilant and manipulative Prosperos of their own modest kingdoms.”

Reality TV producers becoming the new authors, scriptwriters and playwrights signals a move away from “authenticity” as the genre’s most valuable currency. Most island reality shows aren’t pretending to be organic environments where interpersonal relationships are natural – in fact, they are leaning into becoming the opposite. “When we’re watching Love Island, we know it’s a hyperproduced environment,” Moylan says. “And we really don’t care.”

Have we hit “peak island”? Probably not. “There are only so many places you can isolate people. Islands have the best mix of exoticism and practicality,” says Peele. Whether you’re on an actual island or a figurative one, isolation has been integral to reality TV’s status as a cultural phenomenon. The shaping of contestant experiences through controlled circumstances – what Deery calls “staged actuality” – is both the origin and essence of the genre. So from scantily clad singletons in a Mediterranean villa to Lord of the Flies-style survival shows, don’t expect reality TV to give up on the island quite yet. Now pass the suncream – and the popcorn.