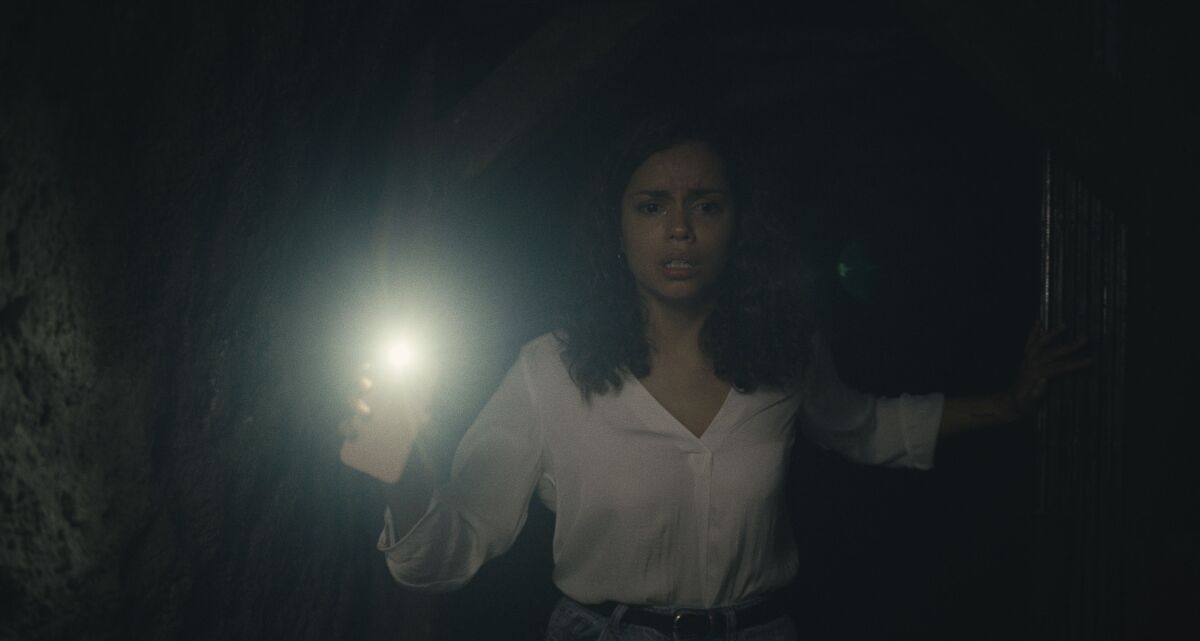 It’s the most spine-tingling time of the year: Spooky season is here and there’s no shortage of scary new stories to devour, from twisty thrillers and Lovecraftian yarns to bloodthirsty aliens, ax-wielding maniacs and macabre stop-motion delights.

With streaming options galore for getting your horror fix, it’s also a great moment to be a genre fanatic. Love horror of all kinds, all year-round? Check out the impeccably curated releases on specialty streaming platform Shudder. Dare to dive even further into the depths of cult cinema? Try Arrow‘s library of classic and contemporary titles.

Even Criterion Channel‘s got a killer lineup of iconic ‘80s horror on offer this month, including Kathryn Bigelow’s rare-to-streaming 1987 vampire classic “Near Dark.”

But if you’re looking for new frights to watch, we’ve got you covered right here. So get your pumpkins carved, throw on a Ghoul Log or two, fill up those candy bowls and hit play on the best new chilling tales you can watch at home this Halloween weekend.

The best horror movie of the year has arrived on streaming via HBO Max! Writer-director Zach Cregger’s twisty classic in the making, about a woman (Georgina Campbell) who finds her sketchy Airbnb already occupied by a mysterious stranger (“It’s” Bill Skarsgård), is a must whether you’ve experienced its deliciously labyrinthine chills in theaters or are diving in for a first viewing.

Pair “Barbarian” — also starring Justin Long and Matthew Patrick Davis, in memorable turns best left unspoiled — with James Wan’s “Malignant,” the WTF horror champion of last year. Make it an over-the-top Halloween triple feature by adding this year’s “Orphan: First Kill” to your playlist, and rejoice, for a new era of bonkers original horror is upon us.

With its ghoulish “Evil Dead”-style roller coaster energy and a live-streaming protagonist you love to hate, “Deadstream” will be remembered as a signpost of our Very Online times. Filmmaking duo Vanessa and Joseph Winter bring a fresh spin and lively comic mania to the found footage subgenre by telling their story from the perspective of Shawn (Joseph Winter), a self-absorbed and recently disgraced YouTuber whose latest stunt sees him spending the night in a purportedly haunted house in a bid to reclaim sponsorships and internet relevancy.

After “Deadstream,” hit play on Shudder’s “V/H/S/99,” the latest iteration of the long-running found footage anthology, whose highlights include the bizarro “Ozzy’s Dungeon” from musician-filmmaker Flying Lotus and the Winters’ Y2K-set “To Hell and Back,” featuring another zany turn by “Deadstream” co-star Melanie Stone.

If you prefer your horror served at peak bleak, director Christian Tafdrup (“Parents”) has you covered with this taut psychological thriller about Danish couple Bjørn and Louise (Morten Burian and Sidsel Siem Koch), who befriend a Dutch couple (Fedja van Huêt and Karina Smulders) on vacation and plan to visit them in the countryside for an idyllic multi-family holiday.

Once they arrive, things go from politely awkward to worse as Tafdrup pulls the strings of his horror of manners tighter and tighter, inspired by his own childhood experience — an achievement that would be darkly funny if it weren’t so sinister. A true chiller of the season that will leave you unsettled.

Not as extreme as the original, the new “Hellraiser” nonetheless comes with Barker’s seal of approval, a delicious new Pinhead played by Jamie Clayton and fleshy design updates for The Priest’s sadistic posse of interdimensional Cenobites. And after 2021’s “Candyman,” it welcomes more of Barker’s nightmarish canon back to the screen and whets the appetite for dark and dangerous horror tales to come.

In 2022 filmmaker Ti West (“House of the Devil,” “In A Valley of Violence”) pulled off a rare feat, releasing two connected original horror movies back to back, both anchored by riveting performances from actor Mia Goth in multiple roles. First came the 1970s-set slasher “X,” in which a porn crew meets their fates at the hands of an old biddy (Goth, under prosthetics and makeup) on a remote Texas farm. A few months later “Pearl” landed in theaters, pulling audiences further into the backstory of Goth’s titular ax murderer as a starry-eyed young woman with showbiz dreams circa World War I — a prequel so unsettling it kept Martin Scorsese up at night.

With “Pearl” new to streaming, take a cue from Marty and double-feature West’s most audacious work to date and delight in Goth’s virtuosic lead performances — some of the best of the year in any genre.

Lyric Ross voices Kat Elliot, a green-haired goth-punk adolescent tricked into making a deal with a pair of bumbling demons (Peele and Keegan-Michael Key) to bring her beloved parents back from the dead. A sprawling story, inclusive cast and socially minded themes lend “Wendell & Wild” more depth than you might expect, while a killer soundtrack will give you the perfect opening to introduce your favorite young horror hound to English punk outfit X-Ray Spex.

Inuit girls take center stage — and take on bloodthirsty, shape-shifting aliens — in filmmaker Nyla Innuksuk’s appealing directorial debut, out now on VOD and streaming on Shudder. With a nod to “The Thing,” “Slash/Back” creates a world entirely of its own as eerie happenings unfold in the sleepy Nunavut hamlet of Pangnirtung, where the headstrong Maika (Tasiana Shirley) rebels against the cultural traditions of her parents while biking around in boredom with her best friends (Alexis Wolfe, Nalajoss Ellsworth and Chelsea Prusky).

Laura Galán gives a fearless performance as Sara, a young woman bullied for her weight in her rural village in the Spanish countryside, in filmmaker Carlota Pereda’s “Piggy,” expanded from her award-winning 2018 short of the same name. Walking home one day after a humiliating prank, Sara witnesses her tormenters’ brutal kidnapping and must decide: What should she do about it?

Where Pereda’s winding moral thriller goes from there is unexpected and surprisingly funny even as it doesn’t shy away from blood, gore and the emotional violence of everyday human cruelty. Among the best genre imports of the year, “Piggy” boasts one of the most elusive elements in horror: a visceral finale that leaves you satisfied as its implications resonate in your mind.

Boosted by a level of production value you won’t find in most genre anthologies, the range of stories from filmmakers like Vincenzo Natali (“Cube”), David Prior (“The Empty Man”) and Catherine Hardwicke (“Twilight”) is at times an odd mix that skews heavily toward the Gothic and atmospheric.

Highlights include an ‘80s-flavored outlier, the beautification parable “The Outside,” directed by Ana Lily Amirpour and starring Kate Micucci, Martin Starr and Dan Stevens (doing an accent that truly demands to be heard), which grounds a tricky tone and goopy effects with relatable performances.

Likewise, “The Murmuring,” from “Babadook” helmer Jennifer Kent, is not to be missed. Anchored by quietly absorbing turns by Essie Davis and Andrew Lincoln, this 1950s-set ghost tale, about a pair of married ornithologists still grieving an unimaginable loss while on a research trip on the Atlantic coast, is one of the most gorgeously photographed and acted pieces of horror cinema of the year, period, testament to the power that can be achieved in the short form.

Looking for a more obscure movie to unsettle your senses this Halloween? “Masking Threshold” is the movie for you. The immersive English language experimental horror from Austrian artist Johannes Grenzfurthner places the audience in the eyes and ears of a protagonist (Ethan Haslam) who has built his own makeshift home laboratory to uncover the source of his tinnitus, with increasingly shocking results.

Utilizing macro photography and ASMR-esque sound design, “Masking Threshold” pulls you down a rabbit hole where Reddit theorizing meets Lovecraftian fixation, paranoia bubbling over into a disturbing sensory experience. Available now on VOD, this is the new horror title to pull out for the genre lovers who swear they’ve already seen all that Halloween 2022 has to offer.