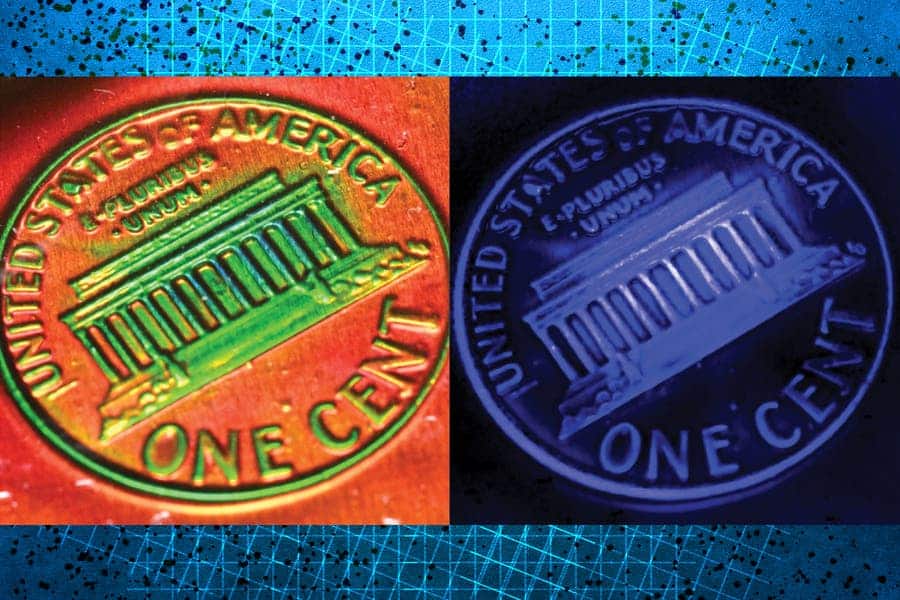 Imagine taking a piece of film and stretching it to reveal a secret message. Or using the hue of an armband as a measure of muscle density or wearing a swimsuit that changes colors as you do laps in the pool. Now, engineers at the Massachusetts of Technology (MIT) have revived and repurposed a 19th-century photographic technique in the hopes of creating this kind of chameleon-like, color-changing materials.

The team was able to accomplish this thanks to photography techniques invented by Gabriel Lippmann. The Luxembourg inventor came up with this way in 1891 to make color photographs using a mirror and a special emulsion. When light bounces off the mirror, it leaves an image on the emulsion. In 1908, Lippmann was awarded the Nobel Prize in Physics for this work.

Previously, scientists have looked at the microscopic surface structures of iridescent organisms like mollusk shells, butterfly wings, and other iridescent organisms to understand how they reflect light and create the illusion of shimmering and changing colors. These structures are angled and layered to reflect light like miniature colored mirrors, or what engineers refer to as Bragg reflectors.

Combining Lippmann’s techniques with modern holographic materials, the MIT group successfully printed large-scale images onto stretchable materials that change color as they are stretched, such as detailed flower bouquets that morph from warm to cooler shades when the films are extended. They also printed films that reveal the imprint of objects such as a strawberry, a coin, and a fingerprint.

The team’s findings, published in Nature Materials, represent the first scalable manufacturing technique for producing detailed, large-scale materials with “structural color,” in which the color is a result of the microscopic structure of the material rather than the addition of chemical additives or dyes.

“Scaling these materials is not trivial, because you need to control these structures at the nanoscale,” said Benjamin Miller, a graduate student in MIT’s Department of Mechanical Engineering. “Now that we’ve cleared this scaling hurdle, we can explore questions like: Can we use this material to make robotic skin that has a human-like sense of touch? And can we create touch-sensing devices for things like virtual augmented reality or medical training? It’s a big space we’re looking at now.”

Miller questioned whether or not the production of large-scale, structurally colored materials could be accelerated by combining Lippmann photography with contemporary holographic materials. Today’s holographic materials, like Lippmann’s emulsions, are made of light-sensitive molecules that cross-link in response to incoming photons to form colored mirrors.

Miller and company first put the sample on aluminum sheets, which have a surface that resembles a mirror, and then projected images onto the sample. Then they removed it and put it on a black silicon backing to help it stay in place. As the material was stretched, the nanoscale structures changed in a way that made them reflect different wavelengths, some of which are invisible to the human eye.

Intriguingly, by angling the film in relation to the incident light, they were able to project hidden images alongside the colored mirrors. Because of this slant, the nanostructures in the material reflected light with a redshift. Exposed and developed with green light, materials would reflect red; exposed and developed with red light would yield infrared-reflecting structures, which are invisible to the human eye. A red image is revealed when the material is stretched, which was previously invisible.

The method developed by the group is the first of its kind to permit the projection of intricately colored structural materials on a massive scale.

“The beauty of this work is the fact that they have developed a simple yet extremely effective way to produce large-area photonic structures,” says Sylvia Vignolini, professor of chemistry and bio-materials at the University of Cambridge, who was not involved in the study. “This technique could be game-changing for coatings and packaging, and also for wearables.”

The researchers are now looking into potential uses beyond the realm of fashion and textiles, such as color-changing bandages, which can be used to monitor bandage pressure levels when treating conditions like venous ulcers and certain lymphatic disorders.

How to find your own style in photography