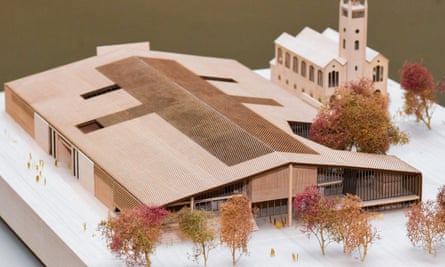 A vast modern art museum under construction in Berlin has been castigated by conservation experts and architecture critics for its poor environmental credentials, as the energy crisis intensifies scrutiny of the efficiency of new buildings.

The Museum of the 20th Century, designed by the Swiss star architects Herzog and de Meuron, is intended to propel the German capital into the top tier of world cities for modern art, competing with New York’s Moma and London’s Tate Modern.

Variously nicknamed “the barn” and “the beer tent” due to its sprawling A-frame shape and low-hanging roof, the museum was hailed as a “building of the future” when its plans were first made public.

However, in recent months there has been growing criticism of its main construction material, concrete – one of the highest contributors to carbon dioxide emissions – and of its open and transparent internal structure, which will require a highly sophisticated ventilation system to maintain temperature and humidity levels.

Stefan Simon, a leading expert in conservation science and proponent of “ecological museums”, has called the museum a “climate killer”, a “structural nightmare” in regards to its upkeep and running costs, and a big “step in the wrong direction” that will fail by a considerable margin to meet the EU’s climate neutrality goals.

He estimates the museum will be several times less energy efficient than many old museums in Berlin, using 450 kilowatt hours of energy per sq metre – about four times the amount required by the similarly prominent Altes Museum, built in 1830 to house classical antiquities.

Simon’s criticism is all the more damaging given that he works at an institute within the Prussian Cultural Heritage Foundation under whose auspices the project is taking place.

The building’s energy inefficiency has been known about for some time, but has been brought into focus by the soaring consumer and business bills resulting from Russia’s war in Ukraine.

The estimated cost of the building had already prompted controversy, having already doubled from €179m (£155m) to €450m. The federal audit office has declared the project to be “overpriced and unecological” and has called for a more sustainable design, arguing that as a building financed from taxpayers’ money, the museum’s creators have a specific duty to set an example.

Nikolaus Bernau, a leading architecture critic, called the building a disaster from both an ecological and economic viewpoint.

“Ecologically speaking the whole thing is an absolute disaster beyond all expectations, largely due to the fact that it is completely air permeable … leading to very large streams of air, which have to be either cooled or warmed, depending on whether it’s summer or winter,” he told the Deutschlandfunk Kultur radio station. Ventilation costs involving heating or cooling air would be “immense”, he added.

Herzog & Meuron have said little about the project, other than to comment that the escalation in costs had much to do with the need to dig deeper into Berlin’s marshy ground to increase the building’s volume after the museum’s surface area was seen to encroach too much on the adjacent St Matthäus church.

Jacques Herzog has referred to “its truly massive rooms”, and the technical challenges they bring with them, as having added to the cost. The architects have argued that the building’s facades have been designed to protect the artworks from direct sunlight.

In response to the criticism, Germany’s parliament, the Bundestag, has granted the prestige project an extra €10m out of this year’s budget in order to tackle its deficiencies.

The culture minister, Claudia Roth, has asked for the design to be revamped, with less concrete used and sustainable measures employed such as rainwater collection and solar energy panels introduced. Experts have dismissed her suggestions as insufficient and at best cosmetic.

She has predicted the building, which will hold works by artists including Gerhard Richter, Joseph Beuys and Ernst Ludwig Kirchner, will become “the coolest museum in the city” though recently admitted it currently “does not have such a good image”.

Roth has been cautious about criticising her predecessor Monika Grütters, a Christian Democrat, who was a leading figure behind the project’s launch. But as a leading Green party member her reputation is arguably on the line if she fails to address the chaos. In a recent opinion piece for Die Zeit, Tobias Timm, an expert on the German-speaking art world, led calls for Roth to halt the project temporarily, at least during the energy crisis.

He suggested that climate protesters who had in recent months glued themselves to works in German galleries and elsewhere in the hope of drawing attention to the environmental crisis should pay more attention to “CO2 generator” museums such as Berlin’s modern art gallery.

The building, part of a major revamp of Berlin’s museum landscape, has been under discussion for decades and will allow thousands of artworks that do not fit inside the existing Neue Nationalgalerie to be permanently brought out of long-term storage.

Discover the Finnish art of sisu and how it can lead you to a happier, holier life