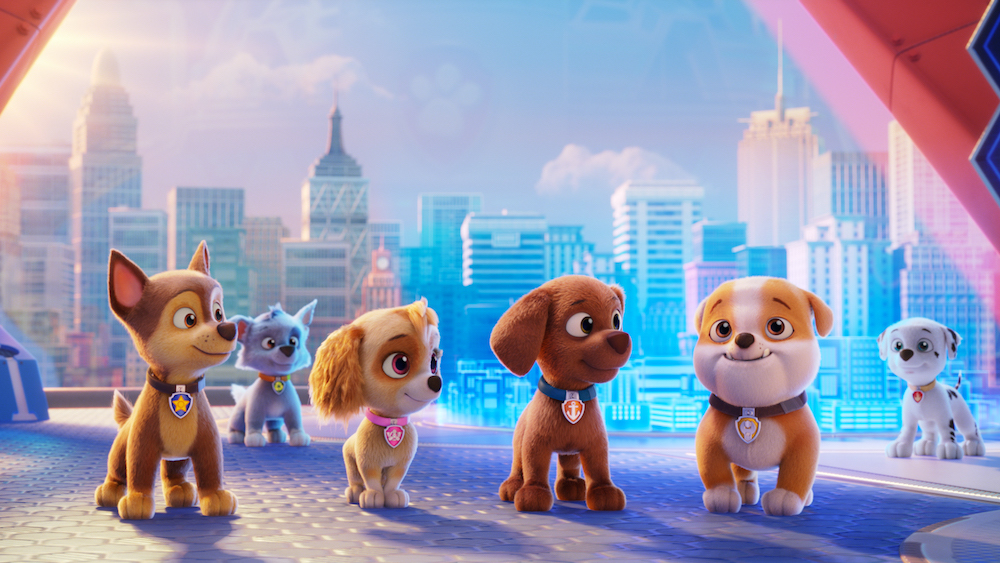 Need proof that moviegoing is far from returning to normal? Look no further than this weekend’s domestic box office charts.

Case in point: “PAW Patrol,” an animated movie based on the popular kids TV show, left Hugh Jackman’s sci-fi romance drama “Reminiscence” in the dust in North America, with the heroic pups of Adventure City collecting six times more in its debut than a film toplined by one of the most charismatic actors in Hollywood. That’s the unpredictable reality of the movie theater business as the delta variant continues to depress ticket sales across the globe. Hurricane Henri, which is currently battering parts of the Northeast, is also keeping people at home.

Neither “PAW Patrol” nor “Reminiscence,” two of the four new films to open this weekend, were able to best Ryan Reynolds’ action comedy “Free Guy,” which remained victorious for the second weekend straight. The Disney and 20th Century film declined a mere 34% in its second weekend and added another $18.8 million between Friday and Sunday, marking an impressive hold with or without a pandemic. Comparatively, multiple films that opened this summer, such as “The Suicide Squad,” Marvel’s “Black Widow” and “F9: The Fast Saga,” declined around 70% in their sophomore outings. So far, “Free Guy” has generated $58.8 million in North America and $111.9 million worldwide.

Many summer offerings, including Paramount’s “PAW Patrol” and Warner Bros.’ “Reminiscence,” were made available on streaming platforms on the same day as their theatrical debuts. “PAW Patrol” landed simultaneously on Paramount Plus, while “Reminiscence” premiered concurrently on HBO Max. Alternatively, “Free Guy,” which had the best second-weekend hold of any nationwide release this summer, is available exclusively in theaters.

In a closer-than-expected second place, “PAW Patrol” earned $13 million from 3,184 North American theaters. That’s not a bad result for a movie aimed at young kids, especially considering children under the age of 12 are currently unable to get vaccinated, keeping some families at home. Among opening weekend ticket buyers, 41% were parents and 47% were kids. It had the strongest turnout in the Midwest and south central U.S., as well as Canada.

At the international box office, “PAW Patrol” brought in $12.8 million from 33 foreign markets, boosting its international tally to $21.5 million and its global bounty to $34.5 million. Spin Master Entertainment, the toy company behind the series, produced “PAW Patrol: The Movie.”

“PAW Patrol,” centering on a young boy named Ryder and some courageous canines who band together to save Adventure City from the evil Mayor Humdinger, was surprisingly well received by youngsters, parents and, yes, even critics. Variety’s Courtney Howard called the film a “gripping, inspiring animated thriller.”

“This is a good opening for a TV-based family animation release,” says David A. Gross, who runs consulting firm Franchise Entertainment Research. “These movies are not in the league with the Disney, Pixar, DreamWorks, Illumination juggernauts, but they cost less, make money and occasionally break out à la ‘Alvin and the Chipmunks,’ ‘Mr. Peabody & Sherman’ and ‘Scooby-Doo.’”

Meanwhile, the Jackman-led “Reminiscence” was barely able to crack the top 10 in its opening weekend. The film, playing in 3,265 North American locations, managed to scrape together $2 million, which is a terrible start given its $54 million production budget. However, the movie’s underperformance isn’t exactly surprising. “Reminiscence,” which garnered mixed reviews, targets older audiences, a demographic that’s been more reluctant to return to movie theaters. The fact that it’s also available to watch on HBO Max didn’t help box office revenues.

Overseas, “Reminiscence” didn’t make up much ground. Opening in 48 international markets, the film made just $3 million for a global total of $5 million. The movie, which was written and directed by “Westworld” co-creator Lisa Joy, also stars Rebecca Ferguson and Thandie Newton.

Also new to theaters this weekend, Lionsgate’s action thriller “The Protege” arrived in seventh place, ahead of “Reminiscence,” with a tepid $2.93 million from 2,577 locations in the U.S. and Canada. The film, starring Michael Keaton, Samuel L. Jackson and Maggie Q, also failed to connect to its target audience of older moviegoers. The few who did turn out were mostly to older males; men accounted for 53% of audience members and 90% were over the age of 25, according to PostTrak data.

At No. 8, newcomer “The Night House,” from Searchlight Pictures, took in a meager $2.9 million from 2,240 cinemas. Since ticket sales for “The Protege” and “The Night House” aren’t far off, the final order could flip when official numbers are tallied on Monday. “The Night House,” a psychological horror film led by Rebecca Hall, was mostly praised by critics (it has an 84% on Rotten Tomatoes), but it was dismissed by audiences, who gave the movie a “C-” CinemaScore.

Elsewhere on domestic box office charts, Disney’s family adventure “Jungle Cruise” landed in third place with $6.2 million from 3,575 venues. The film, which is currently available on Disney Plus for a premium price, is close to surpassing the $100 million mark in North America. After four weeks on the big screen, the Dwayne Johnson and Emily Blunt-led “Jungle Cruise” has made $92.5 million at the domestic box office and $173 million globally.

Sony’s thriller “Don’t Breathe 2” notched the No. 4 spot with $5 million in ticket sales between Friday and Sunday. The sequel to 2016’s “Don’t Breathe” has earned $19.67 million to date. Rounding out the top five is MGM’s Aretha Franklin biopic “Respect,” which fell flat in its second weekend. Declining 57% from its opening, the movie amassed $3.8 million over the weekend for a domestic tally of $15.77 million.

Best New Hallmark Christmas Movies to Snuggle Up to This Season

A holiday guide that goes way beyond Hallmark : NPR