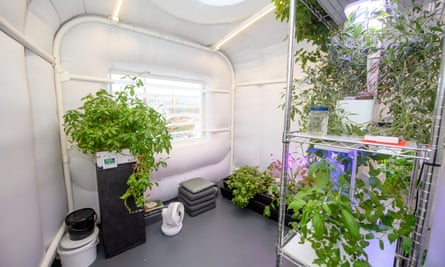 There is a “Martian guitar” manufactured out of recycled pieces of wood and metal with an amp fashioned from a coffee pot. A surprisingly comfortable chair, plus rug and curtains, have been created out of the sort of parachute material a Mars landing craft may have used.

The bedding in the sleeping pods has been decorated with dyes from plants, while a “mist shower” has been made using bits of hose and garden irrigation sprays.

Over the last 10 weeks, the people of Bristol have been taking part in an other-worldly art project – to furnish a “Martian house” that materialised, golden and gleaming, on the harbour-side in Bristol during the summer only using recycled and repurposed objects.

The idea is to give a glimpse of what life might be like if a human colony was established on Mars, with limited living space, possessions and equipment – and perhaps encourage people to think again about how to use finite resources on Earth.

“It’s an art project that uses real science and a place for people to be imaginative about how to live resourcefully, differently, hopefully,” said Nicki Kent, one of the two artists behind the project.

The second, Ella Good, added: “The context of Mars makes people imaginative but also limits what you can actually do. If you are limited, what things do you value, what do you invent, what do you make?”

The house itself was seven years in the planning and construction, a painstaking process that has involved space scientists, architects, engineers, designers and schoolchildren, whose input helped shape the basic two-storey shell.

It is powered by solar panels and designed to be capable of withstanding the environmental challenges faced on Mars, such as temperatures of -63C and exposure to radiation.

An upper level is made from pressurised inflatable gold-coated foil which on Mars might be packed with Martian regolith (soil). The lower level – a pair of shipping containers – would be buried underground and includes two compact bedroom pods along with a shower and a “Martian loo”.

Since August Bristolians have been invited to make objects to fill these tiny spaces.

A retired engineer and music lover made the guitar. “He used things he found around his own house,” said Good. “Bits of old cupboard, the coffee pot, things like that.”

If this musician ended up on Mars, there is a fair chance he would be able to repeat the exercise using discarded Mars mission paraphernalia.

One participant learned to recycle paper and produced a set of playing cards; another made clay (using soil from Watchet on the Somerset coast where the geology has some parallels with Mars) and modelled a pot.

Someone else made a bike that powered a dynamo linked to a light and with a fan to create a breeze to remind the user of Earth winds.

A pillow in one of the bedroom pods has been stuffed with lavender and mustard seeds that could be grown in the house and may remind the sleeper of lovely scents from the Earth.

A second has, perhaps less romantically, been stuffed with human hair. “Some people were really interested in what we have ourselves as a resource,” said Kent.

Another artist helped design outfits that could be worn in the pod. “She thought they didn’t just have to be functional boiler suits,” said Good.

So an adult suit – that also converts into a sleeping bag – has been created out of beautiful fabric and children’s ones are decorated with favourite toys, a bear, a plastic dinosaur and a picture of Superman.

Visitors had one last chance to go inside the house this weekend before it is taken down. The artists, who are residents of Watershed’s Pervasive Media Studio, are hoping to tour the top part around the UK while, appropriately, the bottom section will be recycled.

It will be transported to Scotland and turned into children’s living quarters for a family who needs more room. “They have said they will use every last screw,” said Kent. “It’s good to think it will continue to serve a really useful purpose.”