An airy pilgrimage to see art in the Alps 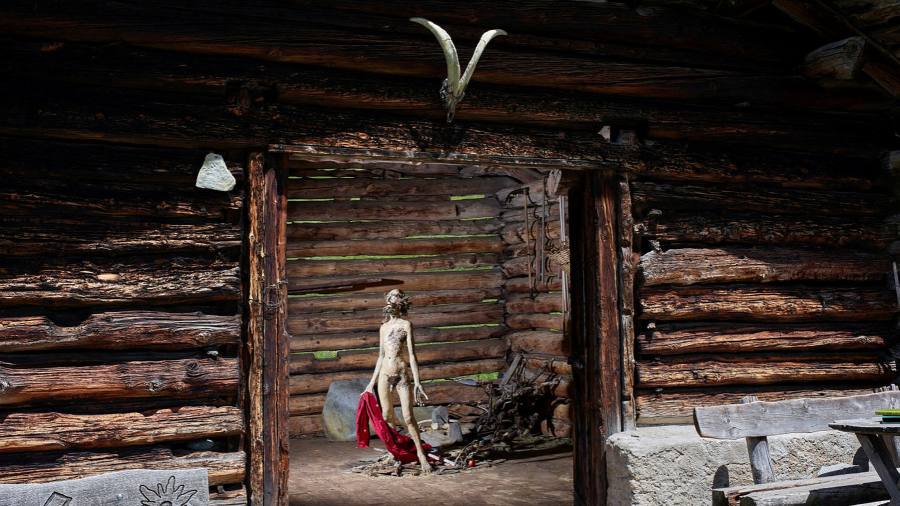 Visitors who want to see the inaugural installation of the Beatrice Trussardi Foundation have two options: hiking or horse-drawn carriage. The foundation has just opened not in a shiny starchitect-designed building but in a 17th-century mountain hut in the Swiss Alps.

This mostly car-free valley, Val Fex, is not the first place you would expect to encounter a contemporary art installation, but the location starts to make sense when you consider Trussardi, the bold Italian cultural entrepreneur who for the past two decades has upended the traditional parameters of the museum through her ambitious “nomadic” projects.

She undertook those as head of the Nicola Trussardi Foundation, named after her fashion-magnate father, which has a long record of outlandish public interventions in Milan. These have included Elmgreen and Dragset’s car with a trailer apparently emerging from the mosaic floor of the Vittorio Emanuele shopping gallery and vast quilts made of brown jute sacks by Ibrahim Mahama covering the city’s historic tollgates. Now, under her own name, Trussardi is transporting this itinerant model outside of Italy — and into the wild.

“We really wanted to bring this formula somewhere else, anywhere else, in the world,” says Trussardi. The idea is that the new foundation, run by Trussardi and her long-term collaborator, curator and museum director Massimiliano Gioni, will realise projects by different artists in less usual or more remote parts of the world. “The combination of the location, which will change every time, and the intervention of the artist is what really characterises our work. The magic that comes out of this is something special,” she says.

“Magic” is a word that Trussardi uses several times during the opening weekend of the foundation, an occasion full of mystery and surprise. We are told little of the installation other than that it is by Poland’s Pawel Althamer — a Joseph Beuys-like shaman-artist figure who has been known to ingest mind-altering substances as part of his work — and that it responds to the spirituality rooted in an area which has long attracted thinkers and artists such as Nietzsche, Giacometti and painter Giovanni Segantini. A press release tells us to expect “a fantastical and mysterious atmosphere” and “a return to nature and asceticism”.

“Asceticism” is perhaps not the first word one might associate with a roving art foundation, especially when pandemic-induced travel restrictions and extreme weather events have created heated discussion about access and privilege in the art world. Such globetrotting initiatives recall the profligate behaviour of pre-pandemic times and the international roster of art fairs, biennales and openings. Nor is the installation located in just any mountain valley, but the Engadin, birthplace of the Übermensch but also winter playground of the uberwealthy; the ski resort of St Moritz is a short drive away.

Those who can enter Switzerland and travel to the picturesque town of Sils-Maria must then choose between horse-drawn carriage or going by foot — although, with the choice of a 20-minute hike or a 50-minute scenic route, it’s hardly scaling the Matterhorn. Opting for the latter, our group starts the ascent along a woodland path, snow-capped mountains in view, the alpine sublime in its full glory.

At points, our journey is interrupted by choral voices floating through the pines and a troupe of alphornists blocking the trail with their elongated instruments. Such instances, courtesy of Althamer, are designed to bring us into a heightened state of awareness.

It is at first hard to see this as anything other than escapism. But then we arrive at the hut which houses the work, “Franciszek”. A family of goats are fully at home inside, clambering around the centrepiece of the installation which stands in the middle of the hay-strewn floor: a papier-mâché sculpture of the Italian mystic St Francis, thin, naked, eyes raised heavenwards, wax-covered skin painted with natural pigments and face decorated with a beard of local flora and fauna. Large wounds on his body reveal a mangled interior held together by strands of string.

What’s striking is how different this humble diorama is from the brash Milan interventions. Whereas those often stuck out from their urban environment, here everything from the subject matter to the materials seems to reflect the natural surroundings. As well as sacred allusions, other references transform this hut into a space of art and reflection.

This vulnerable figure, whose sinewy forms resemble medieval sculpture, is poignant at a time of sickness. The organic materials recall the anti-monumentality of Arte Povera. The live animals, rather than gimmicky, bring something of the spontaneity of a Fluxus happening — at one point a goat urinates on the threshold of the hut. The more time you spend among the boisterous kids and this ecstatic effigy, the more the hike, the setting and the installation as a whole start to make sense as an artistic pilgrimage. As Althamer observes, “Climbing changes attitudes. Moving from the level of human energy towards the natural world has an unexplained power.”

Still, I question Gioni, who is also artistic director of New York’s New Museum, about the benefits of staging an installation 2,000 metres above sea level in an area with a population of about 100.

“It was an aspiration that by going to unusual places we would reach an unprepared audience. The professionals would come but we would get other people who might have never encountered art that way,” Gioni says. A few curious hikers have stopped to peek inside, striking up a conversation with the artist, who affectionately strokes a goat chewing on St Francis’s velvet cape. “I think if [the installation] is life-changing for one person it’s enough, it doesn’t need to reach the maximum audience.”

Trussardi, who relocated to the Engadin during the pandemic, explains that she also chose this location because she felt a need to explore questions relating to nature. “Covid has led to a global existential crisis which has forced individuals and societies to rethink the way they live,” she says. “The context of this artwork addresses some of the urgent issues we are facing today such as climate change and sustainability.”

These are particularly pressing topics in the Alps, where the temperature rose by almost twice the global average in the past 120 years. I wonder about the carbon footprint of flying in a group of international journalists.

As well as running research projects and conferences in parallel with each project, Trussardi hopes that future initiatives will partner with local institutions: “I don’t want the projects to feel parachuted into a context without any roots or any meaningful exchange, so working on partnerships with different constituencies can only enrich the whole process.”

A nomadic art foundation certainly has the potential to be an unconventional model for unconventional times, as an alternative to the blockbuster show but also as a new perspective on the relationship between art and locality. Even if such demanding experiences cause one skepticism, you find in “Franciszek” a work deeply sensitive to its physical and cultural surroundings.

If future projects follow a similar path, then — for those who are able to reach them — they might offer a more contemplative way of viewing art, the kind which St Francis might have approved.