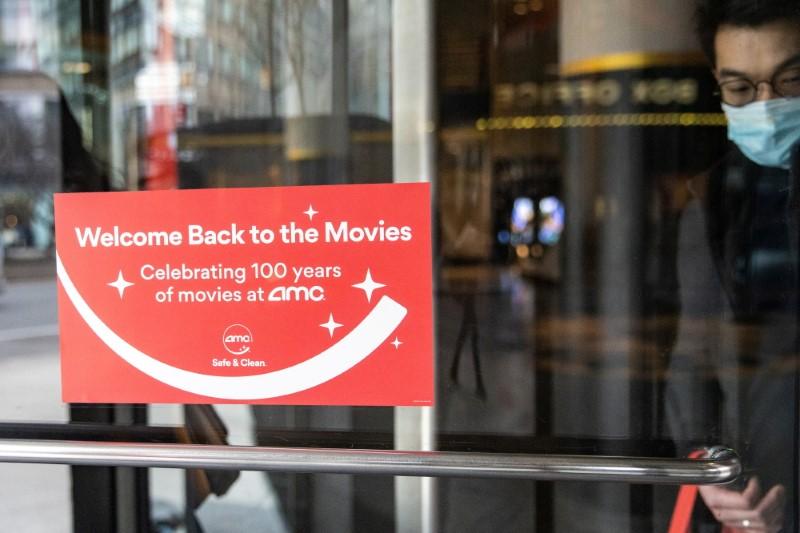 (Reuters) -AMC Entertainment Holdings Inc shares reversed course to trade down 5.7% on Tuesday a day after it posted better-than-expected quarterly results and a deal with Warner Bros for an exclusive movie release period for cinemas.

Shares in the world’s largest movie theater chain last traded at $31.87 after earlier rising as high as $37.16.

Enthusiasm for the stock waned as the session wore on although AMC was still one of the top trending stocks on social media site Stocktwits suggesting a continued interest among retail investors.

While the results topped Wall Street estimates, AMC still posted a huge loss and said ticket sales were well below pre-pandemic levels at just 29% of the second-quarter 2019. Some analysts raised financial estimates but kept neutral ratings.

“The financials are improving but they still have a long way to go to catch up to the lofty stock price,” said 50 Park Investments Chief Executive Adam Sarhan.

“What happened in AMC earlier this year is not typical and that type of a monstrous move up usually means the stock got ahead of the fundamentals and it will take a lot of time before the fundamentals catch up.”

Earlier on Tuesday, founder of Kynikos Associates, Jim Chanos, explained on CNBC why he is bearish on the stock, questioning whether box office numbers would ever return to pre-pandemic levels given the increased popularity of streaming movies.

“The reality is that things have gotten worse for this company. Clearly something has changed. That change is streaming,” Chanos told CNBC.

However, AMC CEO Adam Aron said on Monday that the company had struck a deal with AT&T’s Warner Bros to allow a 45-day theatrical window for movies before their streaming release from 2022, instead of simultaneous release to home viewers.

Aron also said the company is in active talks with every major studio for such deals.

Theatrical exclusivity windows are crucial to box office sales and have long been in dispute between theater chains and studios, which are also trying to cash in on streaming.

The company said third-quarter U.S. ticket revenue was on track to reach 45% of third quarter 2019 levels, showing an improvement from the second quarter. In a nod to tech-savvy investors, Aron vowed to accept bitcoin as payment for tickets this year.

Wold, who rates the stock neutral said “strong box office trends, even in the face of day-and-date streaming availability, points to the potential for a strong 2022 rebound when more exclusive theatrical windows go into effect”.

Wedbush analyst Alicia Reese also raised her 2021 revenue estimate but kept a neutral rating. In fact, most Wall Street analysts say AMC is over-valued, with the median price target on the stock at $3.70 – roughly a tenth of its current price.

Of nine analysts covering the stock, five recommend “hold,” while four have a “sell” rating and one rates it ‘strong sell’, according to Refinitiv.